Pop sensation Camila Cabello was on the receiving end of a chorus of boos from Liverpool supporters as she took to the opening ceremony stage ahead of the UEFA Champions League final. 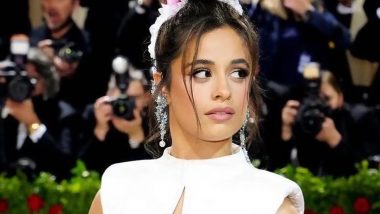 Pop sensation Camila Cabello was on the receiving end of a chorus of boos from Liverpool supporters as she took to the opening ceremony stage ahead of the UEFA Champions League final. The 25-year old performed a medley of four of her hits including 'Senorita' and 'Don't Go Yet' as The Reds prepared to take on Real Madrid in Paris on Saturday night, reports mirror.co.uk. Camila Cabello Gives Breathtaking Performance at the UEFA Champions League Final. – Latest Tweet by Pop Crave.

The fans, who were incensed with ticketing issues that left thousands queuing outside the stadium resulting in kick off being delayed on three occasions, jeered the singer's performance in a bid to let UEFA know their thoughts on the governing body's organisational shortcomings. UEFA Champions League 2021-22 Final Opening Ceremony Date & Time: Watch Camila Cabello Perform LIVE Ahead of Liverpool vs Real Madrid Clash (Watch Video).

Outside of the Stade de France fans of the Anfield club were reportedly sprayed with tear gas by French security officials as tensions mounted. Inside the ground, meanwhile, proceedings eventually got underway with empty seats in the stands despite numerous supporters stranded outside.

Football presenter Gary Lineker appeared to be caught up in the problems himself, taking to Twitter to say: "Finding it impossible to get in the ground. This appears to be very dangerous. Absolute carnage." He soon added that "I'm not sure it's possible to have a more poorly organised event if you tried. Absolutely shambolic and dangerous", before tagging UEFA's account.

Liverpool FC released a statement midway through the second half of the game, which they ultimately went on to lose by a single goal. It read: "We are hugely disappointed at the stadium entry issues and breakdown of the security perimeter that Liverpool fans faced this evening at Stade de France.

"This is the greatest match in European football and supporters should not have to experience the scenes we have witnessed tonight. "We have officially requested a formal investigation into the causes of these unacceptable issues." UEFA, meanwhile, responded with a statement of its own blaming the problems on the purchasing of counterfeit tickets.

(The above story first appeared on LatestLY on May 29, 2022 04:57 PM IST. For more news and updates on politics, world, sports, entertainment and lifestyle, log on to our website latestly.com).