Cursed Trailer: Katherine Langford Headlines This Twisted Arthurian Tale and That's One Reason Why You Should Watch It 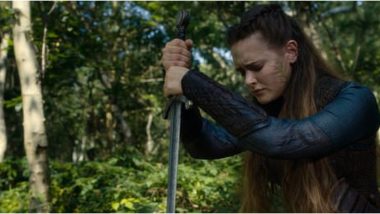 Finally, after weeks of waiting, we have the first footage of Cursed with us. The upcoming web-series by Netflix is a retelling of the King Arthur story, only this time the sword will pick a queen. The lead actress is Katherine Langford playing Nimue. A few weeks back, an enticing promo of the series was revealed. But it barely showed footage from the show. The new trailer is the real deal. It shows us what the show will be like. Cursed Trailer: Katherine Langford Is the Queen Chosen by the Sword! King Arthur, Who? (Watch Video).

There is a lot of magic in the new promo. The CGI is top-notch. It doesn't look over the top, as many movies and series lately. The new trailer is tonally different from the first promo, but still enjoyable. The show is more like The Witcher, featuring Henry Cavill. Can the streamer repeat the success with the upcoming fantasy series? Avengers Endgame: Katherine Langford Was Supposed to Play Tony Stark’s Daughter; Russo Bros Reveal Why Her Part Was Cut from Final Edit.

Watch The Trailer Of Cursed Here:

Nimue will journey through the series to become the Lady of the Lake. She is mysterious and has a magical gift. She will find an unlikely partner in Arthur after her mother's death. She is to find Merlin and give him the sword. The promo also reveals that Merlin has lost his powers.

All 10 episodes of Cursed will stream on Netflix from July 17.

(The above story first appeared on LatestLY on Jun 30, 2020 08:39 PM IST. For more news and updates on politics, world, sports, entertainment and lifestyle, log on to our website latestly.com).