Dame Diana Rigg Dies at 82, Game Of Thrones Actress Passed Away Peacefully With Family By Side, Says Rep 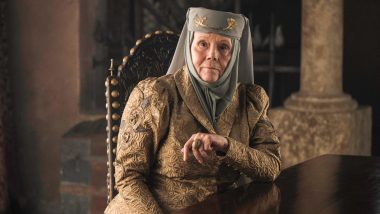 Actress Dame Diana Rigg has dies at the age of 82. She was popular for playing many iconic roles including the Bond Girl in On Her Majesty's Service. But the millennials know her the best as her confident, feminist performance in Game of Thrones as Olenna Tyrell. Her character brought an end to the vicious King Joffrey. No one could have played the badass role of Olenna better than Dame Diana Rigg. In fact, she remains the only Bond Girl to date who managed to get Agent 007 say yes to marrying her. Rigg also played Emma on the hit vintage TV series, The Avengers. May her soul rest in eternal peace. "It is with tremendous sadness that we announce that Dame Diana Rigg died peacefully early this morning," her agent told the press

"She died peacefully early this morning. She was at home with her family who have asked for privacy at this difficult time," her agent's statement added.

"She was the recipient of Bafta, Emmy, Tony and Evening Standard Awards for her work on stage and screen. Dame Diana was a much loved and admired member of her profession, a force of nature who loved her work and her fellow actors. She will be greatly missed," the statement concluded.

Rachael Stirling, Diana's daughter, has said, "My Beloved Ma died peacefully in her sleep early this morning, at home, surrounded by family."

Sir Tom said: "For half her life Diana was the most beautiful woman in the room, but she was what used to be called a trooper. She went to work with her sleeves rolled up and a smile for everyone. Her talent was luminous".

The actress was nominated for various BAFTAs. In 1997, she played as Mrs Danvers in Rebecca. A pathbreaking performance that won her a Primetime Emmy Award.

(The above story first appeared on LatestLY on Sep 10, 2020 07:43 PM IST. For more news and updates on politics, world, sports, entertainment and lifestyle, log on to our website latestly.com).