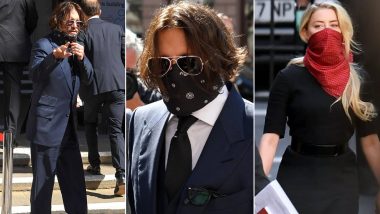 Hollywood actors Johnny Depp and Amber Heard have been fighting the legal battle since long. The estranged couple have accused each other of physical abuse and being violent. While they were not seen together since three years now, they were pictured separately recently at High Court in London where they arrived for trial. The reports also say that Depp claimed that he never hit Amber. The Pirates of the Caribbean actor reportedly claimed that her description of his violent behaviour is entirely accurate. Johnny Depp In Breach Of Court Order Over 'Drug Texts' In Libel Case.

Depp acknowledged the paparazzi as he wore shades and a bandhana. On the other hand, Amber was seen wearing a black formal dress that was matched with a red scarf that she used as mask. She was accompanied by her sister Whitney Heard, girlfriend Bianca Butti and lawyer Jennifer Robinson. Here are the pictures that scattered all over the internet in no time.

The couple got married in 2015. They however went their separate ways in 15 months. Amber briefly dated Tesla Motors owner, Elon Musk. She later found love in her now-girlfriend, Bianca Butti. The two were seen sharing a kiss in January during a Palm Springs vacay together.

(The above story first appeared on LatestLY on Jul 07, 2020 08:02 PM IST. For more news and updates on politics, world, sports, entertainment and lifestyle, log on to our website latestly.com).