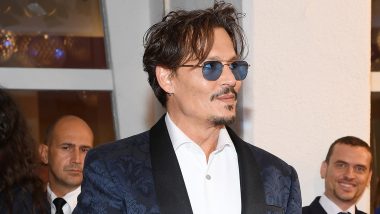 Johnny Depp has been ruled in breach of court for failing to disclose texts that allegedly show him trying to get hold of drugs. The ruling by Judge Andrew Nicol Monday was made as part of the actor’s libel action against Rupert Murdoch’s The Sun newspaper. For the uninitiated, the case is related to an article describing Depp as a “wife beater,” in reference to allegations made by his ex-wife, actress Amber Heard. As per reports, on Thursday, the tabloid’s legal team asked the judge to drop the case saying Depp was in breach of a court order because he had not handed over the “Australian drug texts,” sent between Depp and his assistant, Nathan Holmes. Elon Musk Never Had a Threesome With Amber Heard and Cara Delevingne, Issues a Statement to Respond to Johnny Depp's Allegations.

The messages in question were reportedly sent in late February and early March 2015, before an alleged incident in Australia between Depp and Heard, which Heard claims was "a three-day ordeal of physical assaults". As reported by l  Adam Wolanksi QC, representing NGN, said the texts demonstrated that Depp was trying to get drugs during the visit to Australia. The court was told that references to “happy pills” and “whitey stuff” showed that the actor was trying to obtain MDMA and cocaine, which Wolanski argued was “profoundly damaging to his case”. Aquaman 2: Is Amber Heard Getting Replaced from the DC Film Due to Johnny Depp Controversy?

The trial is due to begin on July 7, with Depp, Heard and Depp’s former partners Vanessa Paradis and Winona Ryder expected to give evidence. It all started when Depp's former wife Heard obtained a restraining order against Depp after accusing him of abuse, which he denied.

(The above story first appeared on LatestLY on Jun 29, 2020 10:17 PM IST. For more news and updates on politics, world, sports, entertainment and lifestyle, log on to our website latestly.com).