Harry & Meghan: Here's Where You Can Watch the Royal Duke and Duchess of Sussex in Their Netflix Documentary

The Harry & Meghan documentary has finally released and here's where you can watch it. 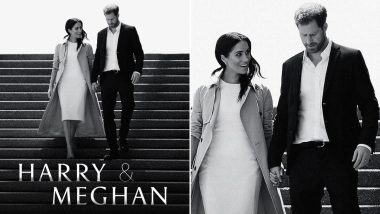 The first three episodes of Prince Harry and Meghan Markle's docu-series have released on Netflix. In their documentary the two discuss the real life of royals in a way that has never been done before. A lot of the show will also deal with how Meghan was treated by the palace, being an American divorcee who is biracial, where all of this is quite astonishing. Harry & Meghan Trailer: The Duke and Duchess of Sussex Talk About Their Departure From the Royal Family in This Netflix Documentary.

This docu-series will cover a wide range of topics and give loads of insights about what it's like for Harry and Meghan as outsiders of a royal family. It will also include Henry VIII’s doomed wives, Princess Margaret and her scandalous affairs, and much more that has piqued the public's interest quite a bit. So if it has piqued your interest as well and you're thinking about tuning in, we got you. Here's where you can watch the docu-series online. Prince Harry Shares the Moment He Realised Meghan Markle Was His 'Soulmate'.

Where to Watch Harry & Meghan

To hear all about Harry and Meghan's side of the story, you can watch their documentary on Netflix only. The six episode docu-series will have it's exclusive run on there. The first three episodes released on December 8, while the other three will release on December 15. Netflix has various different subscription plans that you can check out as well.

(The above story first appeared on LatestLY on Dec 08, 2022 03:45 PM IST. For more news and updates on politics, world, sports, entertainment and lifestyle, log on to our website latestly.com).