Oscar-winning legends Morgan Freeman, Robert De Niro and Tommy Lee Jones are teaming up for the first time for an action comedy. 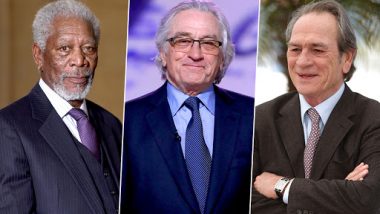 Oscar-winning legends Morgan Freeman, Robert De Niro and Tommy Lee Jones are teaming up for the first time for an action comedy. The film is titled 'Comeback Trail' and is directed by the Bad Boys writer George Gallos. The movie buffs out there have a lot to cheer for at the moment as these three acting giants in one film ensures it to be a crowd puller. De Niro and Jones have previously worked together in 2013's The Family. Whereas, Jones and Freeman were last seen together in 2017's Just Getting Started. Josh Posner is co-writing the screenplay along with Gallo as the film is an official adaptation of Harry Hurwitz's 1982 film of the same. DJ Khaled to Star in Bad Boys Sequel.

As per the Hollywood Reporter, the film is heading to the Cannes market next week with Storyboard Media representing the film. A source revealed, "The Comeback Trail will have De Niro playing Max Barber who, in debt to Freeman’s mob boss, creates an insurance fraud by casting washed-up, suicidal cowboy/movie star Duke Montana (Jones) in a poorly written Western with the intention of killing him during the first days of filming. But Duke somehow rises to the occasion, thereby redeeming his past misdeeds, and brings Max and others along on the same journey."

The Comeback Trail is bankrolled by Steven Tyler Sahlein, March On Productions’ Richard Salvatore and David Ornston, along with Joy Sirott Hurwitz and Julie Lott Gallo.

Donald Pemrick and Dean Fronk are heading the film's casting. Comeback Trail will start rolling in June at Mexico. Often termed as legends, these well-known Hollywood names coming up altogether is a rare phenomenon to look for. How much are you excited for this Morgan Freeman, Robert De Niro, Tommy Lee Jones Action Comedy? Share your thoughts below.

(The above story first appeared on LatestLY on May 13, 2019 02:54 PM IST. For more news and updates on politics, world, sports, entertainment and lifestyle, log on to our website latestly.com).