Jeff Goldblum turns 68 today. So, today, on his birthday, we are going to list down a few dialogues uttered by Goldblum on the screen. 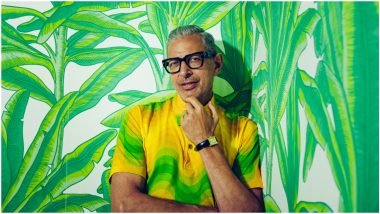 Jeff Goldblum turns 68 today. The actor is known for his whimsical characters, that seem like only he could play on the screen. There are some characters that only Goldblum could have played. Some of his characters hit too close too home. The lines between acting and reality blur and you are left wondering if its the character or Goldblum or if he improvised his lines. Well, whatever the case may be, Goldblum is a loveable actor who increases the entertainment quotient in movies. He is so talented that he can make the audience chuckle even in the middle of a scene as tense as being chased by a dinosaur. Jeff Goldblum Birthday Special: 7 Memorable Roles of the Jurassic Park Star That Deserve Their Cult Status.

So, today, on his birthday, we are going to list down a few dialogues uttered by Goldblum on the screen. These are the dialogues that will forever make us wonder if they were in the script or if the actor improvised them, as they are so spot on. Jurassic World: Dominion's Sam Neill And Jeff Goldblum Have a Musical Collaboration! (Watch Video).

"Yeah, but John, if the Pirates of the Caribbean breaks down, the pirates don’t eat the tourists!" ~ Jurassic Park

"Your scientists were so preoccupied with whether they could, they didn't stop to think if they should.” ~ Jurassic Park

"Taking dinosaurs off this island is the worst idea in the sad, long history of bad ideas" ~ The Lost World: Jurassic Park

"I'm proud of you all. This revolution has been a huge success. Yay us! Pat, pat on the back. Pat on the back. Come on. No? Me, too. 'Cause I've been a big part of it. Can't have a revolution without somebody to overthrow! So, ah, you're welcome. And, uh, it's a tie." ~ Thor: Ragnarok

"Welcome everybody! Hey, let's have a big round of applause for all of today's contenders who have died so gruesomely! Good sports!" ~ Thor: Ragnarok

"A dog barks. But a dog barking on a stage is no longer a dog. This bottle for instance. I pour, I raise this glass to my mouth, and I swallow. Mmm. But am I really drinking? Or am I playing a man who is drinking?" ~ Adam Resurrected

In the near future, the actor will reprise his role of Ian Malcolm in the film, Jurassic World: Dominion. He was seen in a blink and miss cameo in Jurassic World: Fallen Kingdom. But unlike the aforementioned film, Dominion will feature him in a prominent role.

(The above story first appeared on LatestLY on Oct 22, 2020 11:20 AM IST. For more news and updates on politics, world, sports, entertainment and lifestyle, log on to our website latestly.com).