Actor Jon Hamm is no more single as he is seeing his former 'Mad Men' co-star Anna Osceola. Check it out. 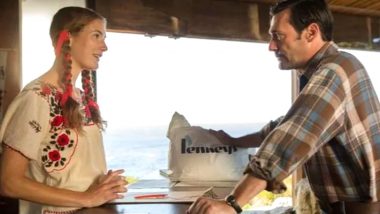 The good-looking 'Mad Men' Jon Hamm who is quite a popular face from the entertainment space is no more single. Reportedly, Hamm is dating his co-star, Anna Osceola, confirms US Weekly. Amid the COVID-19 pandemic, Jon and Anna were clicked at multiple occasions together which automatically sparked rumours of the two seeing each other. Hamm who was seen with Osceola in the season finale of 'Mad Men' (2015) was papped while enjoying a game of tennis with the actress in May (2020) Lynn Shelton, Director of Mad Men and Humpday, Dies at 54; James Gunn, Mindy Kaling and Others Pay Tribute.

In the pictures leaked online, Jon and Anna were seen matching up in a green attire with their masks on while leaving their car and entering the tennis court. That's not it, as, after their play date, the pair on the very next day was seen out for a meal. Reportedly, while it was the man who waited in the car, Anna hopped out to grab some foodstuffs. Earlier to Osceola, Jon has been linked with Lindsay Shookus and Jennifer Westfeldt. Christina Hendricks and Husband Geoffrey Arend Split After 10 Years of Marriage.

For the unversed, the 'Mad Men' had started dating Jennifer in the year 1997 and the two parted ways in 2015. Yep, after being together for 15 years, Jon and Westfeldt chose the different route. Meanwhile, on the work front, Hamm will be soon seen in a Hollywood flick titled Top Gun: Maverick that stars everyone's favourite Tom Cruise in lead. The action drama is supposed to make it to the silverscreen on December 23, 2020. Stay tuned!

(The above story first appeared on LatestLY on Jun 24, 2020 06:47 PM IST. For more news and updates on politics, world, sports, entertainment and lifestyle, log on to our website latestly.com).