Leonardo Dicaprio Birthday: 10 Movie Quotes of the Actor That Are Pure Gold

So today, we are going to look back at some of the most amazing words that Leonardo DiCaprio has said on the screen. These dialogues are, of course, a proof of the talent of the writers, but the actor's contribution can't be overlooked. 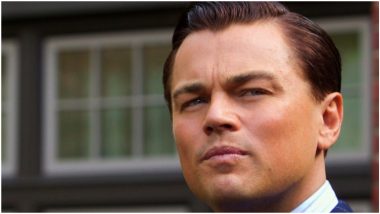 Leonardo DiCaprio turns 46 today. The actor is a global star. He has starred in some of the most iconic movies ever. Fans love him so much that they rallied for years to get him an Oscar. The Academy was compelled to grace him with the honour for his incredible performance in the film The Revenant. There are so many anecdotes about the actor that are popular. For instance, the scene where he bloodied his hand in Django Unchained was improvised by him. For an actor, who puts so much conviction into his role, of course, dialogues of various characters are world-famous. Don't Look Up: Meryl Streep, Leonardo DiCaprio, Timothee Chalamet and More Celebs To Be a Part of Netflix Comedy!

So today, we are going to look back at some of the most amazing words that Leo has said on the screen. These dialogues are, of course, a proof of the talent of the writers, but the actor's contribution can't be overlooked. Kim Kardashian, Leonardo DiCaprio, Orlando Bloom and Other Hollywood Celebs to Freeze Their Instagram, Facebook Account for a Day - Here's Why.

"You can dream of a moment for years and still somehow miss it when it comes. You've got to reach through the flames and take it, or lose it forever. I took it." ~ This Boy's Life

“The only thing standing between you and your goal is the bullshit story you keep telling yourself as to why you can't achieve it.” ~ The Wolf of Wall Street

"Which would be worse? To live as a monster, or to die as a good man?" ~ Shutter Island

"Two little mice fell in a bucket of cream. The first mouse quickly gave up and drowned. The second mouse, wouldn't quit. He struggled so hard that eventually he churned that cream into butter and crawled out. Gentlemen, as of this moment, I am that second mouse." ~ Catch Me If You Can

"As long as you can still grab a breath, you fight. You breathe... keep breathing." ~ The Revenant

"I got everything I need right here with me. I got air in my lungs, a few blank sheets of paper. I mean, I love waking up in the morning not knowing what's gonna happen or, who I'm gonna meet, where I'm gonna wind up." ~ Titanic

"Even great men can be corrupted, can't they? Communism is not a political party. It is a disease. It corrupts the soul, turning men, even the gentlest of men, into vicious evil tyrants." ~ J Edgar

"No idea is simple when you have to plant it in someone else's mind." ~ Inception

"I want to feel things. Really feel them, you know. How's that for an ambition?" ~ Revolutionary Road

(The above story first appeared on LatestLY on Nov 11, 2020 10:37 AM IST. For more news and updates on politics, world, sports, entertainment and lifestyle, log on to our website latestly.com).