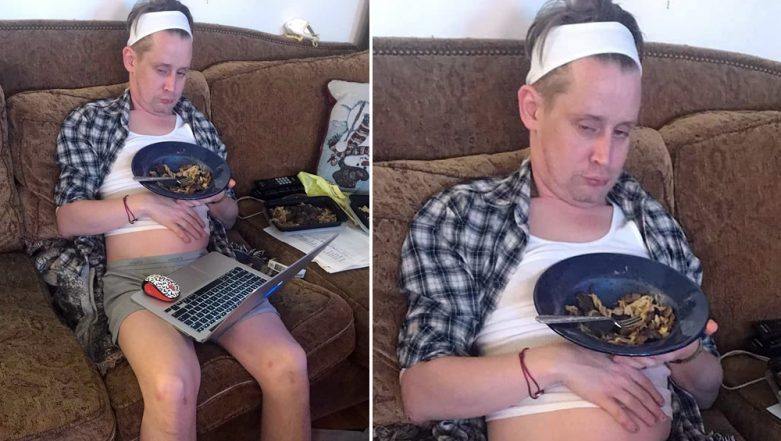 Washington D.C: The 1990 hit film Home Alone is getting a reboot and needless to say, fans are pretty dubious about the news, including the movie's original star, Macaulay Culkin, whose iconic role as Kevin McCallister saw him shoot to fame as a kid. Taking to Instagram, Culkin weighed in on what his beloved character would be up to in 2019 and posted a picture of what a modern-day remake might look like if he were to reprise his role. The photo reminds us of an infamous scene from the film, in which Kevin gorges himself on junk food while his entire family is in Paris for a holiday. Home Alone Reboot: Disney All Set to ‘Re-Imagine’ the 90s Christmas Classic and Twitterati are Outraged By It

"This is what an updated Home Alone would actually look like," the 38-year-old actor wrote alongside a photo of him with his belly sticking out, leftovers in his hand and a laptop placed in front of him. In the snap, Culkin slouches in his boxers on a couch with a laptop balanced on his knees. He also holds a bowl of pasta, with one hand on his stomach and a sick expression on his face. The photo also features takeout boxes and a snowman pillow next to him on the couch. James Jordan Joins Angelina Jolie’s Thriller ‘Those Who Wish Me Dead’

Fans were quick to comment and share their plot ideas for the rebooted version in the comment section. One user suggested that Culkin can play the parent in the updated movie, which will certainly provide a certain sense of Kevin's story coming full circle. On Tuesday, Disney CEO Bob Iger revealed that the studio was "re-imagining" the 1990s classic Christmas movie. The updated film will be available on its new streaming service, Disney+, reported E! News.

This is what an updated Home Alone would actually look like.

Apart from 'Home Alone', that other classics like Night at the Museum, Cheaper by the Dozen and Diary of a Wimpy Kid will all be re-imagined. These flicks are just a handful of titles out of the vast Fox library that Disney now has access to after the entertainment giant's acquisition of Fox in March. While it's unclear if the actor will be part of the reboot, fans of Macaulay saw him parody the 1990 classic last December. Getting into the holiday spirit, he partnered with Google to poke fun at the film.Disney+ is set to launch on November 12.