Filmmaker David Fincher's latest film Mank which stars Gary Oldman as the lead has been receiving positive reviews by critics and cinephiles. Mank is streaming on Netflix from December 2. Have a look. 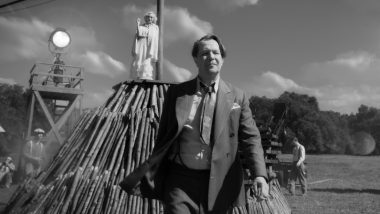 When Oscar-winner actor Gary Oldman was chosen to play screenwriter Herman J. Mankiewicz in Mank, it was kinda expected that the film would be splendid. Set in Hollywood's golden era, the story of this one majorly revolves around how the lead wrote Citizen Kane, (the best movie ever made) despite being broken. If you are unable to decide whether to watch Mank or not, fret not, as we've got you covered. But we would add that if you are into vintage kind of movies, Mank might be your cup of tea. Mank Trailer: Gary Oldman’s Herman J Mankiewicz Races Against Time to Script ‘Citizen Kane’ in This David Fincher Film (Watch Video).

Internet is a great place, which gives us the accurate result almost all the time when searched anything. And so talking on the same lines, we googled some reviews of this David Fincher directorial film and guess what, the reviews seem mostly positive. That's a good sign. Check out the reviews below. Tenet Movie Review: Christopher Nolan’s Espionage Thriller, Starring John David Washington and Robert Pattinson, Garners Mixed Response From Critics.

AZCentral gives the flick a 3.5 and writes, "Mank is all over the place. It's an obvious labour of love for Fincher, which may explain that. But it’s a good movie that is at least in part about the making of a great one. Watch it, and learn about Mankiewicz."

"Written by Jack Fincher, who is David Fincher’s (late) father, Mank is a lusciously evocative, verbally sharp-angled movie that’s never less than engrossing. Yet given that it’s about the creation of Citizen Kane, there’s a way that it’s almost more inside baseball than it needed to be. And that could limit its appeal, " pens Variety.

IndieWire tags Mank as Fincher's best movie since The Social Network and writes, "Mank in every aspect, it casts a profound thematic shadow — the more you look, the more you find — and reassesses its value. For decades, Kane has been celebrated for advancing the language of film, which Mank embodies but doesn’t dwell on. Instead, Mank goes deep on the conviction that the confidence of American capitalism is a tenuous dream, one that Mank tackled with a bravado that bordered on martyrdom."

Ahead, we have The Digital Fix who has given Mank a stunning score of 9/10. "Beware the Emporer’s new clothes? Not at all. Disconnected from Citizen Kane, Mank still blossoms. You might question what the point is, what does it really achieve? But it’s an acerbic take on Hollywood(Land)'s Golden Age, masterfully directed by Fincher who’s modus operandi is to find the screws to turn that other director’s miss. Like it's progenitor, Mank is a dense, ambitious work that never takes itself as seriously as those who watch it," reads the review.

(The above story first appeared on LatestLY on Dec 02, 2020 08:22 PM IST. For more news and updates on politics, world, sports, entertainment and lifestyle, log on to our website latestly.com).