Nikolaj Coster-Waldau Birthday: 5 Best Movies of the Actor To Watch If You Are a Fan of Jamie Lannister (Watch Videos)

On the actor's 51st birthday this year, we name some of his other best performances to date. Have a look. 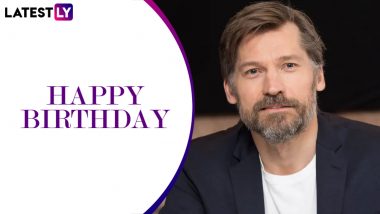 Nikolaj Coster-Waldau, the dynamic Jamie Lannister from Game of Thrones celebrates his birthday on July 27. While the actor received much critical acclaim post his role in HBO's hit series, he was already an established actor by then. A Danish talent, Waldau has registered many amazing projects under his belly. He's a fine actor who believes in improving his performances every time. A sucker for perfection, Waldau has managed to impress the critics with his sincerity towards the profession and also with his earnest form of acting. Nikolaj Coster-Waldau Aka Jamie Lannister on Game of Thrones Pilot: It Was Unbelievably Bad and No One Should Have Picked That Up – Watch Video.

On the actor's 51st birthday this year, we name some of his other best performances to date. Have a look.

Nikolaj Coster-Waldau plays a businessman who's also into art theft. When he comes to know about one of his contacts owning a valuable painting, he decides to steal it but his decision is not as easy as it sounds. A brilliant Norwegian crime thriller that became the country's highest-grossing thriller and also earned a BAFTA nomination in the Best Foreign Movie category.

While the title sounds like a sports drama, this one is not really about it. It instead is about a tennis player who falls in love with a rising tennis star. And while he wishes to win her heart, the film also focuses on his friendship with Waldau's character, who plays his best friend in the film. It's a beautiful sports romantic comedy that will surely win your heart.

For those who rooted for Scarlett Johansson's Marriage Story, Waldau's 1,000 Times Good Night may also seem like a good choice. A successful war photographer is battling her own personal war when her husband asks her to quit her profession for the sake of their two daughters. This demand certainly disrupts the healthy balance in their married life but earns some much critical acclaim for Waldau and his brilliant co-star, Juliette Binoche for putting up such a fine performance. Game of Thrones Fame Nikolaj Coster-Waldau aka Jamie Lannister Praises Aishwarya Rai Bachchan.

Nikolaj Coster-Waldau plays a businessman turned prison gangster in this movie. The movie essentially revolves around his same transformation and his personal equations with his close ones. While his body transformation was extremely impressive in this case, he also earned enough praises for his acting chops.

Nikolaj plays the role of the famous bank and train robber, Butch Cassidy in this movie based on fictionalised events. It follows the story of Cassidy who took a new and different identity of James Blackthorn to return to the US from a village in Bolivia. While Waldau played his younger self, Sam Shepard played his older version.

(The above story first appeared on LatestLY on Jul 27, 2021 09:00 AM IST. For more news and updates on politics, world, sports, entertainment and lifestyle, log on to our website latestly.com).