Priyanka Chopra and Nick Jonas are Finally on Their Honeymoon, Take Off to the Caribbean for a Romantic Getaway - View Pics 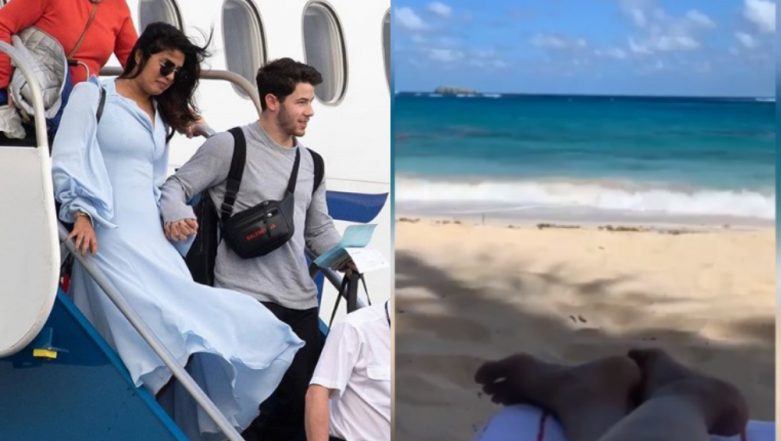 Priyanka Chopra and Nick Jonas's wedding was a global event. The international stars got married in a lavish ceremony on December 15 in Jodhpur. Fans and the media from all over the world were stuck to their screens to get updates about the same. We are not even done talking about Priyanka's kaleere from the wedding, let alone the matrimony itself. Well, Nickyanka are not done with you yet. The hot couple has finally found some time for a romantic getaway. They have taken off to the Carribean for their honeymoon. And the first pictures are out. So, technically these aren't exactly the first pictures from their honeymoon but we want to celebrate every milestone of their relationship. Hence here the first pictures of them taking a flight. Priyanka Chopra is Having a Sound Sleep as Husband Nick Jonas Plays Guitar On New Year's Morning (View Pic).

Also, Priyanka took to her Instagram page to share a very undetailed picture of her vacation. All we saw in the pic were her feet facing towards the beach. C'mon Nickyanka. Whatever happened to the couple that'd post lip locks from their new year's celebration.

On the work front, Priyanka will be next seen in Shonali Bose's film, tentatively titled, The Sky is Pink. The movie also stars Zaira Wasim and Farhan Akhtar. She will also be seen in a supporting role in the Hollywood movie, Isn't it Romantic. The actress will also be seen hosting a chat show for YouTube red. Nick Jonas will be seen in three movies in 2019 - Chaos Walking, UglyDolls and Midway. These two better soak in all the sun possible, because 2019 is going to be one hectic year for them.