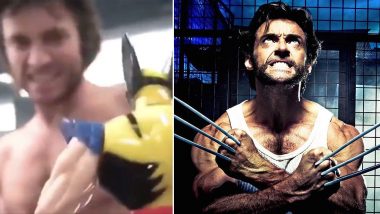 Fans would go to lengths to see Hugh Jackman as Wolverine again. The actor has landed on Guinness Book of World Records for playing the superhero most number of times on the screen. Today marks the 20th anniversary of the first X-Men film, inspired by the Marvel comics. With the film, we got the enigmatic Hugh Jackman as Logan/Wolverine and the genre was never the same. Even if the films didn't work, Wolverine did. He had his own spin-offs. He was even part of the rebooted films while the rest of the cast was changed. Ryan Reynolds Crashes Hugh Jackman's Reunion With the OG X-Men Cast of Patrick Stewart, Halle Berry in a Hilarious Zoom Call (Watch Video).

Now, sharing his delight on special day, Hugh posted an old video on Twitter. He revealed that he oversold to the studio that he can get in shape in three days. Hugh's body in the first film was impressive, but his buffed up avatars in the latter movies was a trendsetter.

In the goofy video, where he is blurry and shirtless, Hugh fights off a miniature toy Wolverine. He is on the sets of X-Men.

So here’s the thing. When the studio called and asked if I could get in shape to play #Wolverine in 3 weeks. I might have over promised! But wouldn’t you have too? Happy 20th Anniversary X-Men Universe. #Xmen #20 pic.twitter.com/bwQJnmyZBI

Just the other day Hugh was joking around with Ryan Reynolds about how his butt is uncensored in Days of Future Past on Disney Plus.

In the coming days, X-Men should have a lot to offer us. The New Mutants should release once the cinemas resume operations. It is the first horror film in the X-Men universe. Also, the characters now belong to Disney so you can expect to see them in the Marvel Cinematic Universe. There are rumours that Wolverine might be introduced in the MCU soon. Chances are slim that we will see Hugh play the character again. He has hung the claws.

(The above story first appeared on LatestLY on Jul 14, 2020 06:40 PM IST. For more news and updates on politics, world, sports, entertainment and lifestyle, log on to our website latestly.com).