Hugh Jackman tried to reunite over Zoom with his castmates from X-Men, Halle Berry, Sir Patrick Stewart, and Famke Janssen — during Global Goal: Unite for Our Future The Concert on Saturday but Reynolds gatecrashed this reunion. 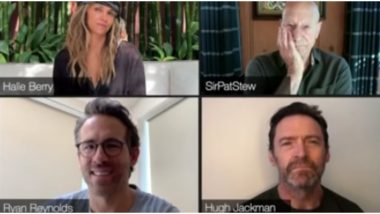 Hugh Jackman and Ryan Reynolds are known for indulging in fun banter and taking digs at each other every now and then. The duo leave no chance to poke fun at each other and the recent X-Men reunion turned out to be yet another incident when this happened. Actor and Global Citizen Ambassador Hugh Jackman tried to reunite over Zoom with his castmates from X-Men, Halle Berry, Sir Patrick Stewart, and Famke Janssen — during Global Goal: Unite for Our Future The Concert on Saturday but Reynolds gatecrashed this reunion. Funnily enough, Reynolds also invited James McAvoy and Sophie Turner to join this call which turned out to be funnier twist.

The video started off with Jackman getting all nostalgic as he spoke about the X-Men films as he said, "Honestly it's kind of surreal you guys, I can’t believe it’s been 20 years since the first X-Men movie." It was later that we saw Reynolds joining this call, leaving everyone confused. Joining the X-Men cast he says, "I hope it’s OK if I join, I figured we were all in X-Men together." His hilarious exchange later shows Sir Patrick Stewart, Halle Berry and Famke Janssen all leaving the call citing reasons of reunions with other franchises with Hugh being stuck with Reynolds in the end.

Towards the end of the video, , Liev Schreiber also appears as he answers Reynolds' question about his reunion with Jackman and says, “X-Men Origins reunite!”

While the video is all fun, in the end, we Jackman comes back to give a heartfelt message as he lauds the efforts and work of those who are fighting on the frontlines of both the coronavirus and the Black Lives Matter movement. Jackman signs off saying, "To all the first responders, essential workers and those fighting for racial justice: I stand in awe of your efforts this year and I stand with you.”

(The above story first appeared on LatestLY on Jun 28, 2020 12:05 PM IST. For more news and updates on politics, world, sports, entertainment and lifestyle, log on to our website latestly.com).