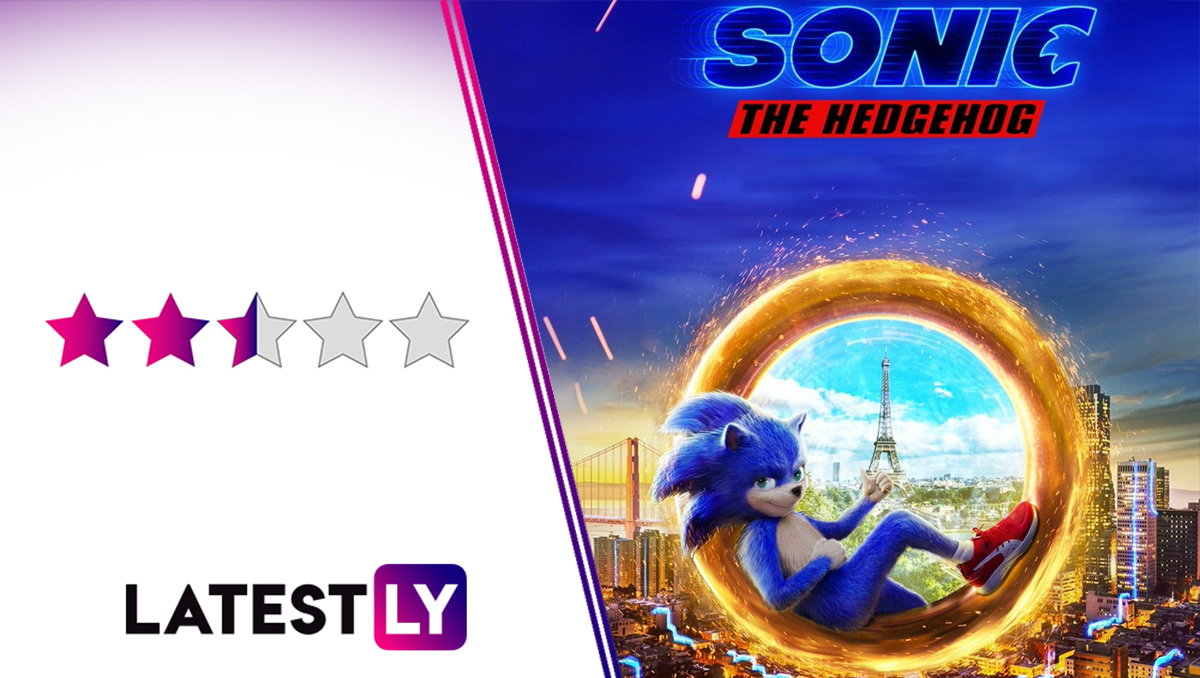 After escaping a dangerous attempt on his life in his home planet, Sonic (voiced by Ben Schwartz) has taken refuge on Earth as a child and has been staying there for years. He zaps around the sleepy town of Green Hills, never falling under anyone's radar (save for one conspiracy theorist, who no one believes) thanks to his speed that makes him invisible. He has taken a special liking for the good-hearted Sheriff Tom (James Marsden, likeable), who is oblivious of his unearthly stalker.

However, living in secrecy was making Sonic reckless, and in an anguished moment, he accidentally makes his powers make half the continent lose its power. The US Government sends a dastardly genius Robotik (Jim Carrey) to investigate the source in Green Hills. Trying to escape from Robotik, Sonic makes his presence felt in front of Tom, who balks at first but then decides to save the blue alien from being a guinea pig from villain's experiments.

The best thing about Sonic The Hedgehog, directed by Jeff Fowler, is that it is a pretty harmless film that you can take your kids to. The premise passes muster, and the reworked Sonic's design, aided by Schwartz's exuberant voicework and facial motion capture, makes things enjoyable at times. Sonic's frequent pop-culture references are also fun to catch, though it may go over the head for the kids. The visual effects are also cool, especially in the chase scene in the finale that jumps continents! Sonic The Hedgehog Star Jim Carrey Slammed for Making a Sexist Comment on a Female Journalist.

Fans of Jim Carrey's '90s work would be happy to see his OTT act create a sense of nostalgia for them. At 99 minutes, Sonic The Hedgehog also doesn't taxes your patience, at least with its runtime.

What it does tax you with is with its lack of novelty in its humour,  its narrative and lack of emotional connect. Most of the fun quotient is played around Sonic's super-speed, but the scenes are rehashed copies of Quicksilver's scenes from the X-Men franchise. Is that the best that filmmakers can think of when it comes to showing 'super-speed' as a power? The bromance between Sonic and Tom is nothing that we haven't seen before. Even Jim Carrey's Robotnik is a paper-thin comic villain who is only made notable because of Carrey's usual antics of going beyond what the script demands.

Watch The Trailer of Sonic The Hedgehog:

Sonic The Hedgehog also rushes past some key moments, not really making us get the emotional heft of the lead at times. Like the opening sequence of a young Sonic in his home-planet is done over with in a couple of minutes. The sequence is supposed to be tragic, but we never really get to feel it. See how Paddington does a similar sequence and makes a truly fine job out of it.

The film also has plenty of loopholes when it comes to showing how Earth-ners interact with Sonic. The first time the main characters see Sonic, they are seen being shocked. But when Tom and Sonic go to a pub, none of the patrons there show a flicker of surprise to Sonic's presence. Similarly, when they roam in the open in the streets of San Francisco, none of the bystanders even care for the alien's presence.

Similarly, Sonic is shown that he can run so fast that he can easily scale vertical heights with ease. Then why does he not do the same when they are at Transamerica Pyramid to get to the roof (where lies his bag of quantum jumping rings)? Other than for us to have an unfunny gag where Sonic is put inside a bag, and people think Tom is a child abuser?

Or for the matter, why does Sonic even need Tom to get him to San Francisco in his car, when he could have run the same distance within seconds? Even if he didn't know the way, all Sonic needed was a map!

All in all, Sonic The Hedgehog offers nothing new to the viewer, even though its main character is a blue hedgehog with Flash-like powers. Watch it if you are a fan of the videogame or are craving to see Jim Carrey doing his '90s schtick.