For all Christopher Nolan fans in India, here's a piece of news that will excite you all. His recent directorial, Tenet is finally hitting the Indian screens on December 4, 2020. 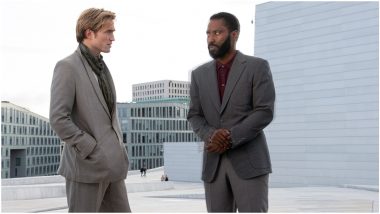 For all Christopher Nolan fans in India, here's a piece of news that will excite you all. His recent directorial, Tenet is finally hitting the Indian screens on December 4, 2020. The movie was earlier released in other countries like Australia and New Zealand where the COVID-19 cases were relatively lesser and the government had eased all the restrictions. India then was still under partial lockdown with theatres and multiplexes being shut across the nation. Post their reopening, the makers of Tenet have decided to release it in Indian markets, making way for other Hollywood projects to consider their releases. Tenet Logo Gets Changed by Christopher Nolan in Latest Trailer And It Has To Do With a Cycle Brand! (Read Deets).

Christopher Nolan's Tenet is a major project to hit the screens since the theatres were allowed to re-open in the country. Besides being the first Hollywood movie, it's also the first big movie to release on the big screens. While the movie received mixed reviews from the international critics, Nolan and his direction were lauded by one and all. The movie was made for a theatre-like experience and seeing it on small screens would have ruined it probably. Tenet, in India, will simultaneously release in Hindi, English, Tamil and Telugu. Christopher Nolan's Tenet Earns $100 Million at the Global Box Office.

The wait is over! Dimple Kapadia announces the release date of #TENET in India. TENET on Dec 4th at #INOX #IMAX! @warnerbrosindia @imax pic.twitter.com/qlbTDtKWCy

Tenet stars John David Washington, Robert Pattinson and Elizabeth Debicki in lead roles. Veteran Bollywood actress Dimple Kapadia also has a special appearance in it. Variety in its review had defined Tenet as a big, brashly beautiful, grandiosely enjoyable one that will provide succour to audiences long-starved for escapist spectacle on this beefy, made-for-Imax scale. The words are certainly encouraging and while we'll reserve our judgement on this, we are hella excited to watch Tenet finally!

(The above story first appeared on LatestLY on Nov 22, 2020 03:39 PM IST. For more news and updates on politics, world, sports, entertainment and lifestyle, log on to our website latestly.com).