Text For You: Priyanka Chopra Lands New Hollywood Film Alongside 'My Heart Will Go On' Singer Celine Dion

Priyanka Chopra has bagged yet another exciting project in Hollywood. The actress will be sharing the screen with music legend, Titanic's "My Heart Will Go On" singer Celine Dion and Sam Heughan in a movie, tentatively titled Text For You. 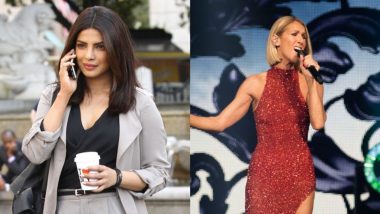 Priyanka Chopra has bagged yet another exciting project in Hollywood. The actress will be sharing the screen with music legend, Titanic's "My Heart Will Go On" singer Celine Dion and Sam Heughan in a movie, tentatively titled Text For You. The movie is the remake of a 2016 German film, SMS Fur Dich. Priyanka will be playing the role of a grieving woman who sends love-filled texts on her dead fiancé's phone number only to find out that it has been assigned to someone else now. Priyanka Chopra Jonas Celebrates 20 Years Of Her Crowning Moment At Miss World 2000; Madhu Chopra Recalls Her Daughter’s Big Win (Watch Video).

That sounds mushy already. Text For You will certainly make us cry. And Bollywood fans know that Priyanka can make you cry with her moving performances. For reference, watch The Sky Is Pink, Mary Kom, and, of course, Barfi.

Text For You won't just have Celine Dion in an acting role but her music will also be heavily featured in it. Sam, famous for Outlander,  plays the man on the receiving end of the texts from Priyanka. His character is also going through a heartbreak. The White Tiger First Look: Priyanka Chopra and Rajkummar Rao's Stills From The Netflix Film Have Already Piqued Our Interest! (View Pics).

Priyanka already has a very interesting line up of films ahead of her. She will be next seen in Netflix drama, The White Tiger, with Rajkummar Rao. She will be playing the villain in a superhero film, We Can Be Heroes. She is also developing a wedding comedy with Mindy Kaling.

Priyanka has also signed a first-look deal with Amazon Studios for her production house. She is already developing a film about Ma Anand Sheela for the streamer. She's also developing a dance reality show based on wedding sangeet ceremony with her husband Nick Jonas. She will also headline Russo Brothers' global-event series, Citadel. Priyanka also stars in The Matrix 4.

(The above story first appeared on LatestLY on Oct 28, 2020 12:05 AM IST. For more news and updates on politics, world, sports, entertainment and lifestyle, log on to our website latestly.com).

Comments
Tags:
Celine Dion My Heart Will Go On Outlander Priyanka Chopra Sam Heughan Text For You
Comments
You might also like