Priyanka Chopra Jonas has shared a video on Instagram celebrating 20 years of her crowing moment at Miss World 2000. 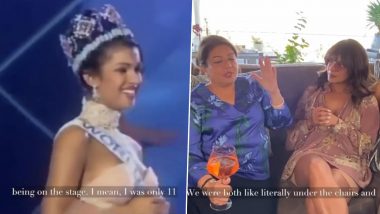 The entire nation was jumping with joy and was totally proud of the young girl Priyanka Chopra for winning the prestigious crown at Miss World 2000. At the age of 18 she was crowned as Miss World 2000 and from family to friends to the fellow citizens of the country were totally overwhelmed to see her win. Priyanka was the fifth Indian contestant to win Miss World and the fourth to do so within seven years. It was after winning this prestigious title that he she had started receiving offers for roles in films. Then and now, Priyanka has made everyone proud! Priyanka Chopra Teases Upcoming Memoir 'Unfinished' By Sharing a Glimpse Of Her Journey From Childhood to the Miss World Win.

Priyanka Chopra Jonas has shared a video on Instagram celebrating 20 years of her crowing moment at Miss World 2000. The video contains montage of pictures and mini-clips from that big moment. In the video you’ll also get to watch Priyanka’s mom and brother, Madhu Chopra and Siddharth Chopra, respectively, recalling the actress’ big win. Priyanka asks her mother, “Do you remember the crowning moment of when I won Miss World?” To this her mom responds as saying, “First runner up was announced, and Miss World is Miss India, Priyanka Chopra. We were both like literally under the chairs. The entire hall erupted, all the Indians just stood up erupted.”

On the other hand, Priyanka Chopra Jonas’ brother Siddharth stated, “I remember at the Millenium Dome, being on the stage when I was only 11, 12 years at the time. But mixed feelings for me were I was... that she won but the very next moment I learned that I would be going to the US for further studies instead of her.” Madhu Chopra also revealed the ‘stupidest’ thing she said to Priyanka after she won the crown. She shared, “And when I hugged her I spoke the stupidest thing that should have been...Instead of telling her that I’m so glad, so happy that you're Miss World, I said, 'Babe, now what will happen to your studies?” Priyanka Chopra Shares a Throwback Picture from Her Miss World Win With a Girl Power Message.

While sharing the above video, Priyanka Chopra Jonas captioned it as, “Picture this... I just turned 18 and won Miss World!! When I finally reunited with my parents among all the chaos on stage, the first thing my mom said to me was “babe, what’s going to happen with your studies?” #IndianMom #20in2020.” We are sure, the Chopras and Jonas’ must be laughing out loudly thinking about what Madhu Chopra told her daughter!

(The above story first appeared on LatestLY on Oct 27, 2020 10:39 AM IST. For more news and updates on politics, world, sports, entertainment and lifestyle, log on to our website latestly.com).