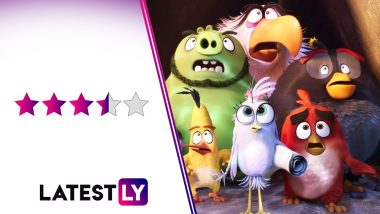 The Angry Birds as a video game created quite a stir in pop culture when it first released. Not only did it become one of the most talked-about games on a global scale but also got a pretty good revenue going. Not to mention how the popularity of the characters from the game became super known which eventually led them to headline a feature film. The 2016 film did bring in an equally good amount of revenue to the production house and the game owners thanks to something called copyrights. Anyway, even though the film wasn't all that great based on the hype that it carried, the original Angry Birds Movie did phenomenally well at the box office. But will the sequel be able to cast the same magic or even better? Read on to know our review. The Angry Birds Movie 2: Cast, Story, Budget, Prediction, Review Of Jason Sudeikis, Josh Gad Film

With a plotline that starts with the same prank war continuing between the Bird Island folks and the Pigs Island, the film immediately sees an interesting twist. Everything is going fine for the two islands whose only enemy are the habitats of the Pigs Island and Bird Island. Red, who gained immense love and fandom after saving the island becomes a watchdog for the citizens. However, all that is shortlived as King Mudbeard Leonard arrives with a proposition of a truce.

Needless to say, Red assumes it to be some kind of a prank but turns out their islands are in trouble as an external threat is looming over them. Zeta, from the Eagles Island, is all set to wreak havoc and bulldoze the two islands with giant hollow ice balls filled with molten lava. Hence, it is now up to Leonard and Red to save the islands from the threat while being in cahoots. Of course, there is some madness, good comic timing, great humour, romance, love and hate relationship, epiphanies and more that make the sequel far more entertaining.

As a part of their rescue mission, King Leonard and Red put together a team to tackle with Zeta. Comprising of Red (Jason Sudeikis), Chuck (Josh Gad), Bomb (Danny McBride), and Mighty Eagle (Peter Dinklage), the new recruits also include, Chuck’s sister Silver (Rachel Bloom) and team up with pigs Leonard (Bill Hader), his assistant Courtney (Awkwafina), and techpig Garry (Sterling K. Brown), as they forage in a new journey to the Eagle Island. Angry Birds Movie 2 New Trailer: Birds and Pigs Team Up to Fight Zeta, But Can They Really Get Along?

Jason Sudeikis reprises his role as Red, the angry bird fears being all alone and hence continues to take on all the problems, challenges and responsibilities on his head. This is his way of earning the love and respect of his fellow habitants. Meanwhile, Chuck and Bomb are still busy being goofy with their own funny shenanigans. New characters are introduced such as Chuck's sister, Silver (Rachel Bloom), who eventually becomes Red's romantic interest. Meanwhile, a truth about Mighty Eagle (Peter Dinklage) is also revealed which plays a key role in all the chaos that has taken over both the islands.

Director Thurop Van Orman and co-director John Rice have done a very good job of bringing forth such a hilarious sequel to the original film. Be it the humour, the dialogues, the eccentric vibe of every character, even the lamest jokes make a chuckle escape our lips. Kudos to the writing which helped the film stand its ground and be as funny as possible in its 96 minutes duration. If you ask me, it is the perfect duration as it manages to cover a vast plotline with utmost ease and is entertaining throughout. The story might be too easy to speculate but you'd still want to sit back and enjoy for the humorous way in which the filmmaker explores it. Nicki Minaj Joins Cast of ‘The Angry Birds Movie 2’, Will Lend Her Voice to Character in the Movie

Gather your hatchlings and find out what happens next in The #AngryBirdsMovie2, in theaters now! pic.twitter.com/oG3hffpBLh

- No brainer but easygoing

- Good voiceover job by the cast

- A decent animation (not all that great)

- An unnecessary track with the three hatchlings and their meaningless quest

It is an out and out, family entertainer. You should watch it if all you want to do over the weekend is use less of your brain and enjoy more laughs. The jokes are childish but it does nudge the child in you to laugh out loud. The Angry Birds Movie 2 is much better than the first part so there's another reason why it should be given a chance! Not to mention how the kids will love the vibrant colours, the cute humour and the fun plotline.

(The above story first appeared on LatestLY on Aug 23, 2019 12:14 AM IST. For more news and updates on politics, world, sports, entertainment and lifestyle, log on to our website latestly.com).