The Christmas Chronicles 2 Trailer: Kurt Russell and Goldie Hawn Embark on a Journey to Defeat the Evil This Festive Season (Watch Video)

The Christmas Chronicles 2 trailer dropped online on October 19, 2020, and must say it cannot get more Christmas-y than this. The film stars longtime couple Kurt Russell and Goldie Hawn as Santa and Mrs Claus. 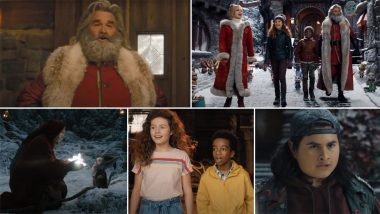 Christmas happens to be everyone's favourite festival considering it comes in the coolest month i.e December and also reminds us of how as kids we used to wait for our gifts from Mr Santa Claus. 2018's hit film The Christmas Chronicles made audiences fall in love with its characters and as promised by the makers, a sequel of the flick will soon be making it to the screens. The Christmas Chronicles 2 trailer dropped online on October 19, 2020, and must say it cannot get more Christmas-y than this. The film stars longtime couple Kurt Russell and Goldie Hawn as Santa and Mrs Claus. Christmas Explosion TikTok Videos Are Dreamy and Serve Best Festive Decor Ideas For The Holiday Season.

The clip shows the glimpse of Darby Camp (Kate) and Jahzir Bruno (Jack) at the chilling North Pole at peace, but not for long. Cut straight to the mayhem, the two kids team up with Santa, his reindeer ride and Mrs Claus after a villain named Belsnickel (Julian Dennison) robs the Christmas star from the village. The group works in sync to defeat the evil. Interesting, right?  Anupam Kher Meets Hollywood Actors Kurt Russell and Goldie Hawn, Calls Them 'Hollywood's Golden Couple'.

Helmed by Chris Columbus, the movie does look exciting. The Christmas Chronicles 2 is expected to release on Netflix and selected theatres from November 25, 2020. Well, the answer to what will be the fate of Santa's village will be out soon! Stay tuned.

(The above story first appeared on LatestLY on Oct 19, 2020 11:07 PM IST. For more news and updates on politics, world, sports, entertainment and lifestyle, log on to our website latestly.com).