The Lovebirds Movie Review: Kumail Nanjiani and Issa Rae’s Fun Chemistry Is Tops, the Film Not So Much! 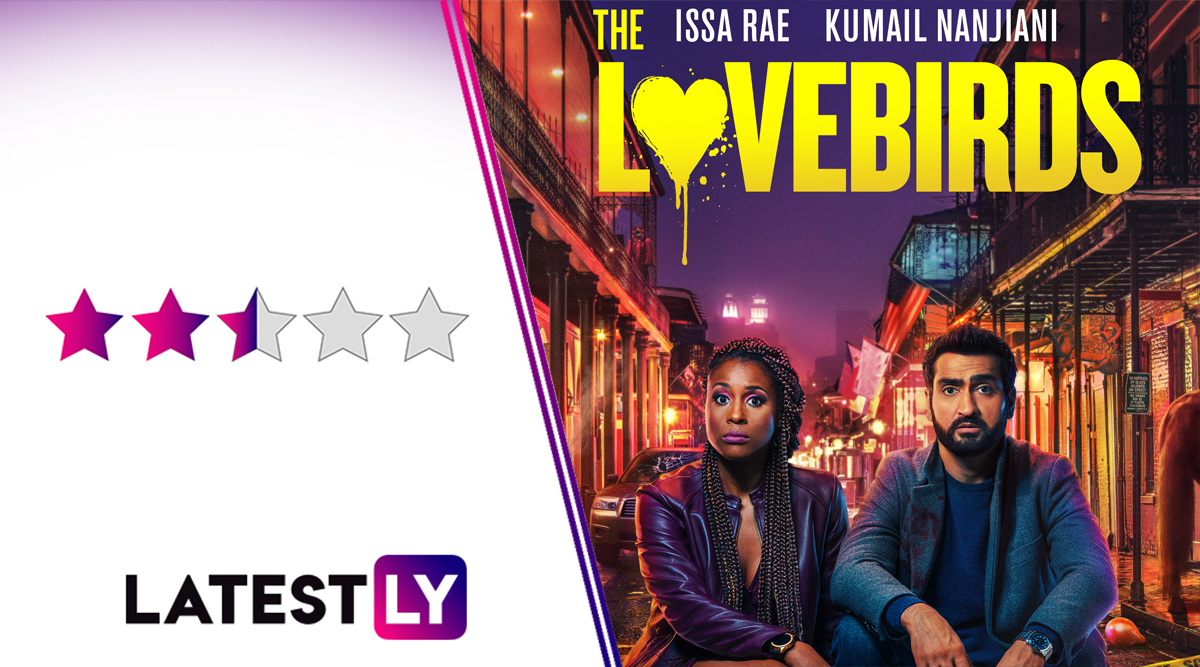 The Lovebirds Movie Review: The last time Kumail Nanjiani (Silicon Valley, The Eternals) and director Michael Showalter collaborated, we got the warm and lovely The Big Sick, based on Nanjiani's own real-life love story. The Lovebirds is more fictional and more comedic in nature, but at the heart of it, it is yet another love story that goes through some crazy ups and downs over the course of one night. It also points out one crazy fact - if Kumail Nanjiani is put behind the steering wheel, it means insane trouble! Stuber, anyone? Kumail Nanjiani and Issa Rae Starrer The Lovebirds Heads For a Netflix Release Amid COVID-19 Lockdown.

Jibran (Kumail Nanjiani) and Leilani (Issa Rae) immediately sends off sparks after their first date, hinting at a 'made for each other' commitment. Cut to four years later and things aren't so passionate anymore. Differences have cropped up in their live-in relationship. Jibran can't stand Leilani's social media obsession; Leilani is annoyed with his snobbish attitude. And they can't come to terms to whether they need to participate in a globe-trotting reality show called 'The Amazing Race'.

Not to worry for the couple goes through their own Amazing Race, when a stranger uses their car to kill a man. Thinking they would be embroiled in the murder, they go underground. Leilani also has the dead man's phone, that invites more trouble for them. Together they decide to have their own adventure to find out why the murder happened, while their own relationship goes through its self-healing process. Kumail Nanjiani Recreates Hugh Jackman's Wolverine, Tom Cruise's Top Gun and Other Iconic Film Scenes for Latest Photoshoot (View Pics).

The Lovebirds, that's streaming on Netflix, is a fun watch when you have nothing else to do during one of the many lazy afternoons this unexpected lockdown has given us. Both Nanjiani and Rae are in totally great form, especially Rae, and they also boast of having an incredible chemistry, which makes this comic thriller more bearable than it should be. Their bantering, and later making up at a couple of unusual spots, is entertaining enough. But sometimes it's not enough to mend its inconsistent and unoriginal screenplay.

Watch The Trailer of The Lovebirds:

As much as you try to ignore the deja vu feel, The Lovebirds lacks freshness of Date Night, and the smartness of Game Night, apart from the fact that it has an interracial couple in the lead. They are a couple of funny sequences that do work well. Like the sequence involving the couple in binds, a horse and a pan of hot bacon grease. Or when they gate-crash into a secret meeting of an Illuminati-like group, that spoofs Stanley Kubrick's Eyes Wide Shut.

Apart from these scenes, though, the film fails to spring a knockout scene or memorable supporting characters. Bonus point for the movie is that runtime is crisp and Showalter keeps things energetic as much as possible. For a movie that you can watch from the comforts from your home, that's good enough.

The Lovebirds isn't as bad enough to make you to flip the bird at the film, but it isn't as great if you expect it to relive The Big Sick magic. At best, it is a breezy watch, with its two leads in good form, and in these times, a little laugh is always good, na? The Lovebirds is streaming now on Netflix.