The Summer I Turned Pretty is based is a web series based on the book by author Jenny Han. Lola Tung stars as the lead role in the show and her and Jenny Han share their thoughts on the beautiful sets of the show. 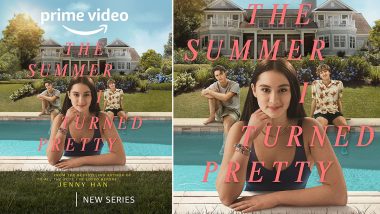 Author Jenny Han, on whose book trilogy the web series The Summer I Turned Pretty is based, along with lead actress of the show -- Lola Tung, has opened up about the magical sets of the series that has become a talking point among the audience across the globe. To All the Boys: PS I Still Love You Review: Lana Condor-Noah Centineo-Jordan Fisher's Triangular Tale Is All About New Age 'Happily Ever After!'

One of the most crucial elements of the series was the realism and relatability with which it took elements from the book and brought it to life on screen. The summer house, that was the life of the series, was a set that seemed magical to not just the viewers but also to all those who were part of the show.

On being asked what was the most beautiful part of filming the series, author and creator Jenny Han revealed: "It was the house."

For her, it was an emotional moment as she shared: "I stepped on that stage, and definitely teared up. It was like something taken right out of my brain. Certain things were really important to me with the house, and one of them was it felt like a real lived-in space that people spent time in. There wasn't a false note to me. There were so many little details in that house."

Lola Tung, the lead actress essaying the role of Belly in the show, recalled a moment when the set's realism surprised her. "I remember walking around the set one day, and I stumbled across this music box. I opened it and didn't expect anything really, and it just started playing this beautiful music. I thought this was such a special little detail. We never see this music box, but it's there and it adds to the feeling that the house is lived in... it's very magical." Noah Centineo Flaunts Six-Pack Abs as He Shares His Workout Photos on Instagram.

This coming-of-age series, which has elements of self-discovery, friendship, first love, heartbreaks and overarching reality, has been renewed for a second season after the success of the first one. All seven episodes of the series are available to stream on Prime Video.

(The above story first appeared on LatestLY on Jun 29, 2022 05:27 PM IST. For more news and updates on politics, world, sports, entertainment and lifestyle, log on to our website latestly.com).