The Tender Bar is a coming of age biographical drama directed by George Clooney and based on the memoir novel by JR Moehringer. The movie stars Ben Affleck, Tye Sheridan, Daniel Ranieri, Lily Rabe, and Christopher Lloyd. The Tender Bar is streaming on Amazon Prime Video. 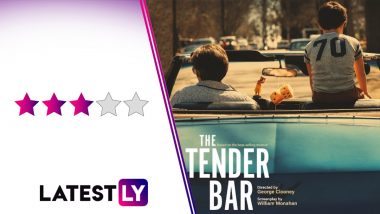 The Tender Bar Movie Review: Which 11 year old doesn't want someone like Uncle Charlie in their life? When little JR (Daniel Ranieri) poses this question first in George Clooney's new directorial The Tender Bar, we do nod at him more out of whimsicality. But by the end of the movie, wo do end up believing that every kid needs a parent figure like Uncle Charlie (Ben Affleck) to guide him or her through some of the thinnest episodes of their life. Only if The Tender Bar listened to JR's advice and focussed more on JR's relationship with Uncle Charlie, then this would have been a truly magical movie. OTT Releases Of The Week: Justin Hartley’s This Is Us Season 6 on Disney+ Hotstar, Ben Affleck’s The Tender Bar on Amazon Prime Video and More.

The Tender Bar is based on the memoir by the novelist JR Moehringer, focussing on his early life at Long Island and later his late teens spent at the Yale university. Narrated by an unseen adult JR (voiced by Ron Livingston), the movie begins first in the '70s, when a young JR and his low-on-money single mother Dorothy (a fantastic Lily Rabe) move to their grumpy grandfather's (Christopher Lloyd, an always welcome face to see on screen) house in Long Island. Dorothy's brother, Charlie, a perennial bachelor, also stays in the same house.

JR's father is an absent figure, a radio personality referred to only as The Voice, who abandoned his wife and son early on. In the less-educated but worldly-wise, book-literate Uncle Charlie, JR sees a father figure and his Uncle is too happy to play that responsibility. The kid often hangs out at Charlie's bar, The Dickens, that is thronged by colourful inhabitants of their neighborhood and whose shelves are stacked with books. It's here where the ambition to be a writer takes seed in JR's mind. However, the gaping hole that his father left continues to haunt JR, even if he doesn't admit it, even when he into his teens, and played by Tye Sheridan, and find himself in another toxic relationship with Sidney (Briana Middleton), a girl he loves.

The Tender Bar is a very likeable, if tad predictable, feel-good coming-of-age drama with an ending that kinda parallels Good Will Hunting, which also starred Ben Affleck, with Mr Affleck pulling off something similar here while also merging elements of the late Robin Williams' role into his.

The best parts of the movie are in the early portions that focuses on the 11-year-old JR and his gradual bonding with his uncle, while dealing with his father's absence and his mother's thankfully curable cancer. It is hard not to like any scene that Affleck, Lloyd or Rabe appear in, each actor bringing a sense of disarming charm, brevity and vulnerability into their scenes, even if that scene requires the grandpa to fart incessantly. The Midnight Sky Movie Review: George Clooney’s Performance, the Visuals and Alexandre Desplat’s Score Are the Saving Graces.

Which is also why the portions dealing with the teenage JR's life at Yale, his sketchy obsession with the 'lower-upper-middle-class' (thanks for that term, JR!) Sidney and his tenure at The New York Times feel weaker in comparison, because Uncle Charlie is sparsely used in these portions. You can totally see the difference when JR returns to The Dickens and how the mood gets so better. It helps that Clooney keeps the runtime controlled here, while also eking out fine performances from all involved.

And yes, it gets even better in the finale when JR finally catches up with his father and discovers the pathetic figure that he has become - Max Martini leaves quite the impact here. This arc could have been expanded more - even if JR denies to Sidney, he has persistent Daddy issues. Still, it was a nice, if expected, way to wrap up JR's story by allowing him to exorcise the one haunting demon of his past before he could drive into the uncertainty of the future.

- All The Performances, Especially Affleck and Rabe

- The Middle Portions are Weaker in Comparison

The Tender Bar is a sort of return to form for the director in George Clooney, a likeable drama with even more likeable acting turns. It may not reach the highs of Confessions of a Dangerous Mind and Good Night, and Good Luck, but along with the haunting but passable The Midnight Sky, this movie shows Clooney is hopefully out of the rough patch moving towards more goodness. The Tender Bar is streaming on Amazon Prime Video.

(The above story first appeared on LatestLY on Jan 07, 2022 03:48 PM IST. For more news and updates on politics, world, sports, entertainment and lifestyle, log on to our website latestly.com).