Thor: Love and Thunder – Chris Hemsworth Dressed in His Asgard Avatar Is Upto Something in This Leaked Video From the Sets (Watch)

One can see an ariel view of the busy set which then zooms into a place where Chris is shooting with his team. Dressed in his Asgard avatar, the actor seems to be shooting for a fun scene on a set that looks like a stage. 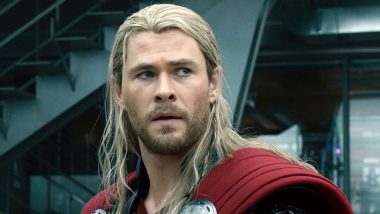 Chris Hemsworth and the team have been shooting meticulously for Thor: Love and Thunder in Sydney.  The crew flew to Australia last month and quite often we see leaked video and pictures of the team shooting for the film. Last month pictures of Chris in his Thor avatar were leaked online. He was seen in a slightly new avatar and fans started to speculate what character development will Thor see in this film. Natalie Portman, who will be seen as Lady Thorn was also spotted taking horse riding lessons before the commencement of the shoot. Thor: Love And Thunder - From Natalie Portman's Return To Valkyrie's LGBTQ Reveal; All You Need About Cast and Release Date of Chris Hemsworth's Film!

Now, a new leaked video from the sets of Thor: Love and Thunder has surfaced online. One can see an ariel view of the busy set which then zooms into a place where Chris is shooting with his team. Dressed in his Asgard avatar, the actor seems to be shooting for a fun scene on a set that looks like a stage. A bunch of cast and crew members are also gathered around Chris but we can't really make out who is there with Thor in this current scenes. The setup is massive and seeing the video will only make Thor fans even more excited for the film.

Christian Bale will be joining the cast of Thor for the fourth instalment and will be essaying the role of the villain in the film. Vin Diesel, who voices Groot, will also return for Thor: Love And Thunder. Tessa Thompson will reprise her role as Valkyrie in the fourth Thor movie. The actor will be playing the first LGBTQ superhero in the flick. Ryan Gosling to be a Part of Thor: Love and Thunder? Fans Speculate About His Character After Spotting Him With Director Taika Waititi.

Thor: Love and Thunder was among Marvel's 2021 releases. However, its shooting was abrupted due to the ongoing COVID-19 pandemic. The big-budget film will be co-written by Taika Waititi. Jennifer Kaitlyn Robinson will assist him with writing. The film which was earlier slated to release in November 2021, is now scheduled to hit the theatres on May 6, 2022.

(The above story first appeared on LatestLY on Mar 05, 2021 11:51 AM IST. For more news and updates on politics, world, sports, entertainment and lifestyle, log on to our website latestly.com).