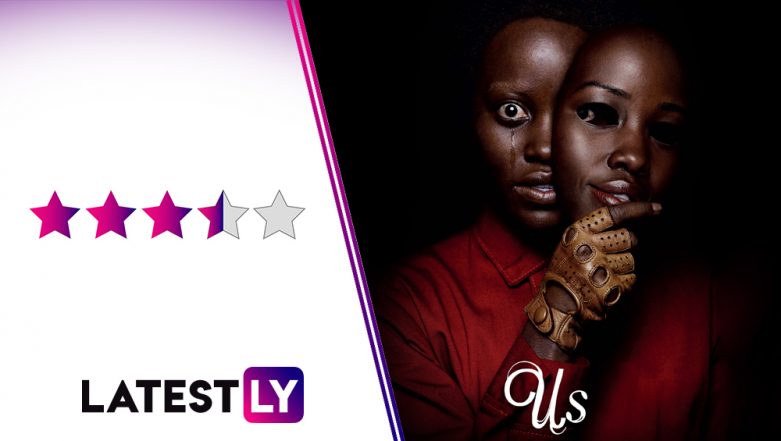 Man is man's worst enemy. This thought forms the crux of Jordan Peele's latest movie, Us. Like me, if you had been enamoured by his debut movie, Get Out, I am sure you would be highly excited to watch what Peele's brilliant mind has in store for us in errr… Us. So what is the movie all about? Jordan Peele has been saying that, unlike Get Out which revelled in social commentary over racial politics, Us is a horror movie and nothing more. I won't completely agree, though. Though the social relevance in Us is not as strong as that in Get Out, the movie gives us a lot to ponder over human behaviour and our meddling with the fabric of creation. Us New Trailer Out! Jordan Peele Promises Enough Scares To Creep You; Watch Video.

So what is the movie all about? Us follows Adelaide (Lupita Nyong'o) who faces a shocking incident in her childhood at her hometown in Santa Cruz that left her traumatized for some time. Years later, a now-married Adelaide returns to Santa Cruz with her husband Gabe (Winston Duke), daughter Zora (Shahadi Wright Joseph) and son Jason (Evan Alex). At the beach with their family friends the Tylers (Elisabeth Moss, Tim Heidecker), Adelaide notices a couple of coincidences that mirror what happened years back. Also, Jason has a strange experience at the beach which he doesn't share with his family.

Later that night, the family is attacked by a group of four strangers all dressed in red jumpsuits. To their utter shock, the family finds out that these strangers are doppelgangers of their own selves, albeit with murderous intentions. What's, even crazier is when Adelaide and her family find out that they are not the only one facing this fatal predicament.

Us is not like a usual horror movie, though it is definitely scarier than Get Out. There are no unnecessary jump scares to bother you. In fact, the one time that the movie attempts to pull a jump scare twice through a mechanical owl, gets its just desserts the second time. Peele, instead, relies on the zaniness of his script, effective performances from the cast and an incredible background score to raise the spooky chills. Mike Gioulakis' cinematography allows the camera to chase after the characters in a sense of foreboding.

After an intriguing start, Us takes some time to get its groove. But once that home invasion scene happens, there is no stopping back for Jordan Peele, as he keeps us guessing what the heck is happening and make us 'tethered' (pun intended) to our seats with the relentless supply of thrills. What works well here is the movie's refusal to bow down to the usual tropes of its genre. Us is what you can call a 'thinking man's horror film', something which even Get Out and, if I may have the audacity to add here, the mightily underrated Cabin in The Woods. These are movies that keep getting better with the multiple viewings, while relying on serving a dark, thrilling experience laced with satirical heckles to humanity. Did Barack Obama Just Say-Donald Trump is in Deep Shit? BuzzFeed & Jordan Peele Aware You About Fake News.

Us treats both its protagonists and the antagonists with a sense of curiosity that overlaps each other at times. And yet, the smartness in the script is also its undoing. After a terrific second act, we expect the film to soar to greater heights. Instead, the narrative becomes repetitive and even confusing. The unravelling of the doppelganger mystery is quite interesting but it leaves you asking hell too many questions to leave the theatre with a satisfied mind. Don't want to spoil anything here, but the themes inoculated in the reveal needs deeper pondering. Sure, even Get Out tinkled with such a narrative, but its conclusion feels much more satisfactory and rounded. Not so much the case with Us, whose ending leaves us feel incomplete. But then even Stanley Kubrick's The Shining got us through a similar predicament, and it is hailed as a masterpiece. There is no doubt that lovers of cult cinema would offer the same love to Us.

There are also some tonal issues in the third act, especially when Peele tries to infuse humour in some of the interactions between Adelaide's family members. Rest assured though, Us is unlike any movie you have seen in recent times, forget just the horror genre.

And then there is that excellent cast, spearheaded by chameleonic Lupita Nyong'o. As both the fiercely protective Adelaide and her vengeful doppelganger, Lupita shakes you up real good about the incredible potential left waiting to be explored in this Oscar-winning actress. The way she uses her eyes and voice modulation that instil both empathy and terror in us is just WOW! Winston Duke is quite genial as Adelaide's easy-going husband, though some of his quips don't land well in the third act.

Shahadi Wright Joseph and Evan Alex are quite natural as the kids. Shahadi, especially, will give you the chills as the doppelganger with a creepy smile. In a brief role, Elisabeth Moss makes a huge impact as the snooty family friend with a surprising turn.

- The Zany Premise with Its Subtle Social Commentary

- The Third Act Leaves with Too Many Questions

Us isn't the heart-winner that Get Out is, and I am sure that Jordan Peele never intended to go that same path. It is a very subversive film that may call itself a horror movie, but gives you a lot to ponder on the ideas that its narrative loves to offer you. Expertly directed and well-performed, especially by Lupita, Jordan Peele's Us is a refreshing thrill-fest that stokes your curiosity and entices you for that second watch.

Rating:3.5out of 5
Comments
Tags:
Elisabeth Moss Get Out Jordan Peele Lupita Nyong'o Movie Review US Us Movie Us Movie Film review Us Movie Review Winston Duke
Comments
You might also like