The ex-girlfriend of rapper Common also said that the rule applied when she made jokes about the singer having herpes. 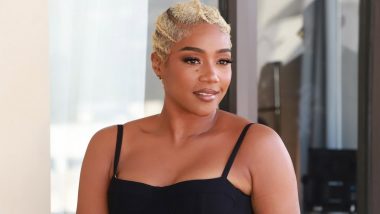 Actress-comedian Tiffany Haddish shared in a new interview that she reached out to rapper Usher before she made jokes about herpes. Speaking with Cosmopolitan for its Travel Issue, Haddish claimed that she always asks for permission to make jokes at the expense of celebrities. "I never thought you could just say horrible things about somebody and think they're not going to slap the s**t out of you, and I think that's because I grew up in foster care," the comedian/actress shared. Tiffany Haddish Reveals She Once Turned Down $10 Million for a Social Media Post.

"I check and verify with people. If I can't say it to your face, I shouldn't be able to say it," she continued. "Period. That's how I draw the line." The ex-girlfriend of rapper Common also said that the rule applied when she made jokes about the singer having herpes. "I got this joke, 'I curse you out with joy. I hope that you spread it. I hope you spread it like Usher spreads herpes.' I have said that in front of Usher," she said. Tiffany Haddish Describes Will Smith-Chris Rock’s Slap Incident at Oscars 2022 As the ‘Most Beautiful Thing’.

"Usher said, 'Your a** is crazy.' I said, 'Yeah, well, there's a rumour out there saying you got herpes. I don't know if you do or don't, but that s**t is funny'," she recalled her conversation with the musician, who was accused of exposing multiple individuals to the herpes virus without their knowledge or consent.

"He's like, 'Yeah, it is.'" Should the 'Yeah!' singer responded differently, Haddish explained: "If he had said, 'Tiff, don't say that no more. I don't like it. I'm not comfortable with you saying that,' I would stop saying it." Back in 2017, Usher made headlines after several women came forward with allegations that the singer gave them the sexually transmitted disease.

They sued him for it with one case reportedly being settled outside the court. The other cases, meanwhile, were dismissed. Despite that, the news generated memes and jokes about Usher and herpes.

(The above story first appeared on LatestLY on Aug 15, 2022 03:05 PM IST. For more news and updates on politics, world, sports, entertainment and lifestyle, log on to our website latestly.com).