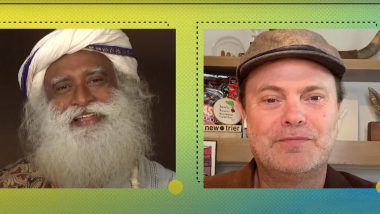 No one saw this coming but The Office alumni Rainn Wilson has interviewed the Indian guru, Sadhguru. They had a chat over a video call, which has been presented by YouTube channel, SoulPancake, as part of their series, Hey There, Human. Rainn is famous for playing the character of Dwight Schrute on  TV. Sadhguru is one of the most popular Indian Yogi. The two men talked about humour, finding the light during the dark times, and maintaining a relationship with the environment. Don't Freak Out but John Krasinski Wanted Jim and Pam to Breakup in Final Season of 'The Office'.

"If you are joyful, you will always look at things from all sides and one side will always be lighter," Sahduru said, while talking about humour. "It is not by ignoring the dark side, and always trying to be funny, you achieve something, or just talking about the dark side you will achieve something. It is more important that people have a more holistic picture of every situation. Because there are never going to be perfect situations in our life." Utopia Trailer: 'Dwight' Fights a Pandemic in This Exciting New Footage (Watch Video).

BTW, this is not the first time, when Sadhguru has been interviewed by a celebrity. One of his more famous chats was hosted by Kangana Ranaut, where the two conversed about spirituality at length.

Rainn looked genuinely delighted hearing words of the Indian guru. "Educated people are struggling to be eco-friendly but they are anyway destructive. Simply, because, we have understood education as a way to exploit something. Human life can be improved, biodiversity can be enhanced just by shifting to what is called tree-based agriculture or agroforestry," Sadhguru said while talking about the environment. He also raised the issue of farmer suicides due to economic stress.

"What an amazing force of nature, Sadhguru is," Rainn said, while wrapping up.

(The above story first appeared on LatestLY on Aug 27, 2020 10:52 PM IST. For more news and updates on politics, world, sports, entertainment and lifestyle, log on to our website latestly.com).