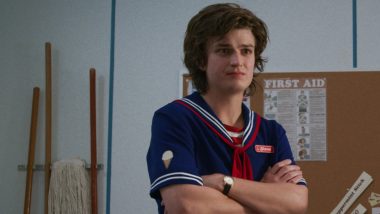 Joe Keery has the best character arc on Stranger Things as Steve Harrington. Arguably even better than Eleven. The character has evolved from being a bully to being sort of the mother of the group. Apparently, fans are so fascinated by the character that they keep changing the actor's Wikipedia to match it. On multiple occasions, Joe's wiki page has been altered to list him as 'Teen dad' and 'proud mother of four'. Finally, Wikipedia has locked his page, tired of fans vandalising it over and over again. His Wikipedia entry is now locked until August 2021. Stranger Things Season 4 Will Be 'A Lot Scarier', Confirms Joe Keery Aka Steve Harrington.

The news is both endearing and saddening at the same time. Much like Steve Harrington. The number of sources who can now edit the page is limited by Wikipedia. What if he wins a big award or marries in the meantime? Stranger Things Star Noah Schnapp's Twitter Account Gets Hacked, Racial Slurs and Suicidal Thoughts Get Posted.

Changes to Joe's page have been hilarious and subtle. At one point, his partners were listed as 'single and ready to mingle'. The character Steve has been dumped by Nancy Wheeler on the show and also had his advances turned down by Robin in season 3.

At one point, the actor's name on the page was changed to "Joe 'smooth hair' Keery." His number of children have been listed as four to seven.

At one point, the Wikipedia page of Parks and Recreation character Jean-Ralphio was changed to reflect Steve Harrington as his father.

Stranger Things has resumed shooting for season 4. It can be assumed that fans of

(The above story first appeared on LatestLY on Oct 17, 2020 11:05 PM IST. For more news and updates on politics, world, sports, entertainment and lifestyle, log on to our website latestly.com).