Sweet Home, The Witch Part 1, Hellbound - 5 K-Dramas And Movies To Watch If Stranger Things Season 4 Leaves You Wanting For More

Despite the episodes in Stranger Things Vol 1 Season 4 being almost an hour long, the fans are not fatigued at all. In fact, they are looking for more and this wait till July 1 for Vol.2, is making them anxious. Worry no further as we have 5 kdramas which easily sweeten that wait. 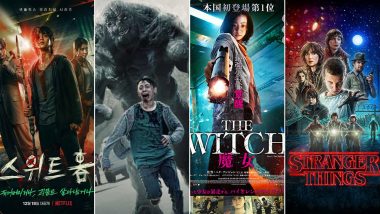 Stranger Things season 4 volume 1 hit Netflix today. The wait for the same has left fans delirious and now that it is here, people can't get enough of it. Obviously, Netflix is leveraging this excitement for the season by dividing it into two parts. Volume 1 released today and the next one is expected to hit the platform on July 1. The series this time is taking on a sinister creature named Vecna with mind controlling abilities. How the kids and adults from Hawkins face this new monstrosity forms the show. Stranger Things 4 Review: Critics Call Millie Bobby Brown and Finn Wolfhard's Upcoming Season the Best One Yet!.

Despite the episodes being almost an hour long, the fans are not fatigued at all. In fact, they are looking for more and this wait till July 1, is making them anxious. Sample this:

Already finished volume 1 of stranger things season 4. I don’t think I can wait until July for volume 2

Well, we do have a solution for that. In the Kdrama world, there are several shows that can be binged-watched till Volume 2 of Stranger Things finally arrives. Trust us, you won't be disappointed.

Cha Hyun-Su played by Nevertheless' Song Kang is a loner and moves into an apartment in a building after his family dies. He spends his life in despair and to add to it, humans of the building are mysteriously turns into monsters. That leaves him with no choice but to band with the surviving humans of the building to fight them. Stranger Things has always been a creature horror series and so, Sweet Home is a worthy replacement.

I might cry ;;; It's literally a COVID-19 Korean horror Netflix Original series.

This action film has a lot of similarities with Stranger Things. For one, medical experiments are done on a girl to turn her into a lethal weapon just like Eleven. Two, she doesn't remember her past and three, she can take down a battery of men with super human strength. Played by Kim Da-mi, The Witch Part 1: Subversion is a must-watch. And guess what? A sequel is in the offing too!

A very popular and much loved webtoon character doesn't remain what he is. The webtoon world actually exist in a parallel dimension and one day, they overlap. While it isn't the upside down, an alternate universe just like Stranger Things creates a world of mystery and possibilities. This is an edge of the seat thriller with just the right amount of romance.

Your deal with the devil will take you to hell, that's the basic premise of Hellbound. It as enough intrigue factor on how the deals are cracked and their consequences just like Stranger Things. All Of Us Are Dead, True Beauty, Hellbound - 7 Kdramas Based On Webtoons That We Recommend.

Master's Sun is about a woman who starts seeing ghosts after an unfortunate incident. This is supernatural romance that has enough ghosts to put to rest. Like Eleven , only Tae Gong-Shil (Gong Hyo-jin) has this supernatural ability and she uses it to help the troubled souls.

Just pretend that you don’t see anything 👻👻👻

We are sure there are lot of other kdrama in the similar space that you can watch. But these are the ones we would pick to keep our excitement in check till July 1.

(The above story first appeared on LatestLY on May 27, 2022 07:06 PM IST. For more news and updates on politics, world, sports, entertainment and lifestyle, log on to our website latestly.com).