Priyanka Chopra And Nick Jonas Are Being Extra Cautious Amid The COVID-19 Pandemic, Here's Why

riyanka Chopra and Nick Jonas are being extra cautious during the COVID pandemic. The 38-year-old actress opened up on how the couple is coping during the global health crisis. Read on. 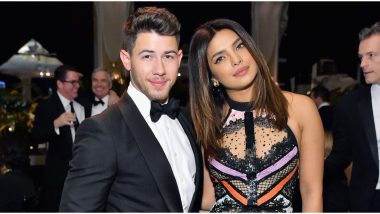 Los Angeles, Aug 5 (IANS) Priyanka Chopra and Nick Jonas are being extra cautious during the COVID pandemic. The 38-year-old actress opened up on how the couple is coping during the global health crisis in an interview with People magazine, reports femalefirst.co.uk. "I'm asthmatic and my husband's type 1 diabetic, so we have to be even more careful. But there have been a lot of Zoom calls and Zoom brunches. We have a really large friends and family group, and I've had a lot of birthdays in my family that have happened recently, so we've done a few socially distanced lunches," she said. American Journo Slammed for Calling Priyanka Chopra as Nick Jonas' Grandmother.

"If you have the ability to have a human connection with friends, family, whether that's virtually or whether that's in a socially distant way, I think that's really important to feel a sense of normalcy," she added. The actress married pop star Nick in 2018. She also revealed how she has been focusing on her career and family during the pandemic. Assam Floods: Priyanka Chopra, Nick Jonas Make Donations, Actress Urges People To Help (Read Tweet).

She said, "As a creative person, for me, a lot of projects ended up happening during this quarantine. I've been developing shows and movies, writing, and I finished my memoir. It's been a creatively sound time, besides being absolutely strange."

(The above story first appeared on LatestLY on Aug 05, 2020 11:54 PM IST. For more news and updates on politics, world, sports, entertainment and lifestyle, log on to our website latestly.com).