Priyanka Chopra and Nick Jonas married at Umaid Bhawan Palace in Jodhpur in December 2018. The age gap difference between them has always been the talking point, but the couple is unfazed by it. 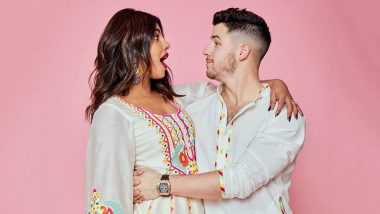 Priyanka Chopra Jonas and Nick Jonas are one of the most loved Hollywood’s couples. They have fans across the globe, and netizens keep waiting for the duo to share posts on their respective Instagram social media handles. On the occasion of Valentine’s Day this year, Nick shared a video in which he and his wife were seen dancing to the hit Bollywood track, “Aankh Marey” from the film Simmba. While Nick’s dance moves was a treat to watch, Priyanka couldn’t stop cheering her husband. Nick Jonas Dances to ‘Aankh Marey’ and Priyanka Chopra Jonas Just Cannot Stop Cheering For Her Valentine (Watch Video).

The video of Priyanka Chopra Jonas and Nick Jonas dancing together won hearts of millions of fans. It has been more than a month since this video went viral, but it has again hit the headline, after an American journalist of Pakistan origin shared the same video and called Priyanka as Nick Jonas’ grandmother. This did not go down well with many of Priyanka and Nick Jonas’ fans. They instantly started trolling her and one of the Twitter users even commented saying, “What's the bitterness about?” ‘Nick Is A Desi Munda at Heart’, Says Priyanka Chopra Jonas.

Here’s The Video Shared By The Journo

Exclusive video of Nick Jonas dancing to “Aankh Marey” with his grandmother pic.twitter.com/2v1O6SpWHu

And Here’s What Twitterati Have To Say

What's the bitterness about?

They are just husband and wife...

Why Is Age-Gap An Issue Even Today?

What a pity - shaming someone on her age. This is the lowest one could go !!

I don't understand how being married a man about ten years younger makes her his grandmother? Is your take any better than that vomit article The Cut published soon after their weddings? Please try to be less sexist and not reinforce unnecessary gender roles, even in jest.

All Support For Priyanka Chopra Jonas

whatever! Your life will continue to be under her shadow. Will never be above her. Never!https://t.co/At7Sqtew8h

Yes, They're A Perfect, Adorable Couple

Get a life lady ! They're an adorable couple . You're jus J !

Priyanka Chopra Jonas and Nick Jonas were dating for a brief period and post that they took their relationship to the next level. In December 2018, Priyanka and Nick married at Umaid Bhawan Palace in Jodhpur. The age gap difference between them has always been the talking point, but the couple is unfazed by it.

(The above story first appeared on LatestLY on Mar 30, 2020 03:54 PM IST. For more news and updates on politics, world, sports, entertainment and lifestyle, log on to our website latestly.com).