25 lakh people in 2265 villages are reported to be affected due to the natural disaster in Assam. 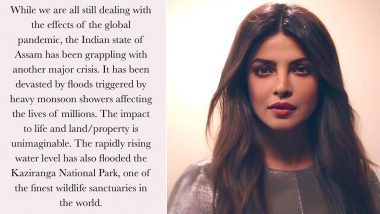 2020 could not get worst with the calamities hitting the globe one after the another. In India, Assam is right now at the brink of break down due to massive floods. The heavy downpour during this year's monsoon has affected many lives and has caused immense destruction in the state. As the state is in the urgent help, actress Priyanka Chopra has urged everyone to donate and do their bit. Dil Bechara: Priyanka Chopra Promotes Sushant Singh Rajput's Last Film As It Begins Streaming On Disney+ Hotstar.

The global icon took to the micro-blogging site to convey the message by her and on the behalf of husband, Nick Jonas. She posted note that explained the plight of the state currently. She told that she and Nick have contributed individually to the cause and requested everyone to do so. She also posted heartbreaking pictures and help that 'Action Aid' and 'Rapid Response' are providing to the people. In the tweet, she wrote, "#Assamfloods#PrayForAssam #AssamNeedsHelp You can make a donation here:Rapid Response, Action Aid." Check out the tweet and the link to make donations below.

You can make a donation here:

Meanwhile, the death toll reported in Assam due to floods has touched 102. Not just drowning, but people have also lost lives due to landslides in the risky areas. 25 lakh people in 2265 villages are reported to be affected due to the natural disaster.

(The above story first appeared on LatestLY on Jul 27, 2020 10:53 AM IST. For more news and updates on politics, world, sports, entertainment and lifestyle, log on to our website latestly.com).