Showstoppers the band has redefined the classical definition of music and have set new benchmarks in the entire history of music industry. Rather than believing in fake promotion, dedication and positivity were their ultimate weapons to achieve success. 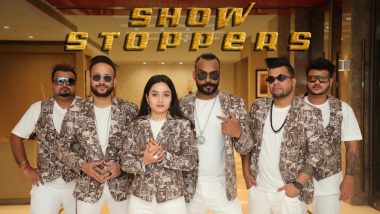 Imagine a world with stillness, a world without no music, yeah it's even impossible to imagine such a world. Music is the ultimate element of the nature which adds enthusiasm in our lives.

Showstoppers the band has redefined the classical definition of music and have set new benchmarks in the entire history of music industry. Rather than believing in fake promotion, dedication and positivity were their ultimate weapons to achieve success.

DJ and band were always considered two different elements in the industry but showstoppers made an exception at this. The astonishing hybridization of DJ and Band made them unique from rest of the bands. Rather than simply replicating the Western bands, Showstoppers the band has preserved the Indian culture and served the audience so well, despite of a great diversity in a national like ours.

DJ Abhi performed his task so wonderfully that the band has annexed hearts of millions of people. From West Coast beats to Trap Beats, he is the gifted music creator in the industry. He is an international acclaimed DJ and has collaborated with top notch music labels.

Rinku Malhotra, the name which one can say a other synonym for energy. The hustler has made us proud at international level with his unimaginable skills and dedication towards DHOL-the energy booster instrument.

One singer can sing only one type of genre, Rao Gaurav and Shipra Bagh devastated the fact so blunderly, that one cannot avoid addiction to their melodious voices.

The talent of these guys is really pious . They have won various reality shows in their struggle period and represented our country globally at many occasions.

Bhuvan Vikram Singh, the diamond star of the band, who has carried this musical voyage of showstoppers band magnificently. And his management skills are so perfect, that even MBA students should takes lessons from this legendary champ!!! His pretty good sense of humour maintains a light mood among the band members and helps to generate a family bond within the crew members. He is an experienced man who has done various shows on big platforms like MTV.

Overall the entire team is full of gems and it's their unity and team spirit that made them able to reach so far.

(The above story first appeared on LatestLY on Oct 15, 2020 06:01 PM IST. For more news and updates on politics, world, sports, entertainment and lifestyle, log on to our website latestly.com).