Singer Brandy Is Back with New Music Album After 8 Years 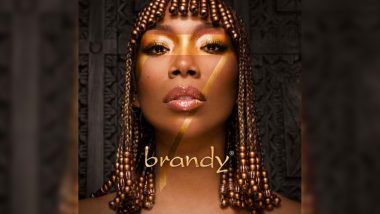 Singer Brandy has unveiled her seventh album B7 after an eight-year break. The 15-track album is co-written and co-produced by Brandy. It also has collaborations with Chance the Rapper, Daniel Caesar and her daughter, Sy'rai, reports variety.com. "B7" released on July 31 via her record label Brand Nu and eOne Urban. After a five-year legal battle with her former label, Chameleon Entertainment, Brandy told Rolling Stone that she has finally found freedom with this record's release. The Power Of Dreams Of A Kid: Badshah to Launch His New Hip-Hop Album with Eight Tracks

"I put everything I could into this project. It was so freeing for me, because I did get a chance to really dig in and write from my heart of hearts," Brandy said. "I was able to really get a lot of things off of my chest, really use music as a way to escape and heal." Although she reached a settlement with Chameleon in 2017, Brandy said she took her time releasing "B7" to ensure it was her best work yet. Taylor Swift Treats Fans with Her New Album ‘Folklore’

"Iaï¿½m glad that I didn't rush it because when you've been absent from music for so long you want to make sure that it's your best work," Brandy said. "For me, I approached this album like this is my last project. What would I want it to sound like? How would I want to express myself?"

(The above story first appeared on LatestLY on Aug 02, 2020 04:45 PM IST. For more news and updates on politics, world, sports, entertainment and lifestyle, log on to our website latestly.com).