9 is directed by Jenuse Mohamed. It will be the first Malayalam movie to have its trailer being telecast in 15 Malayalam channels simultaneously at 9 pm today. 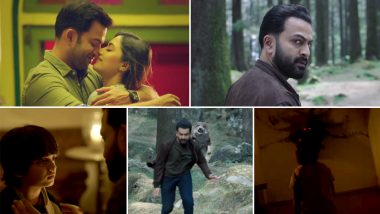 Not only is Prithviraj Sukumaran one of the finest actors in Malayalam cinema of this generation, but he is also one of the riskiest producers in the industry. His latest film, the unusually titled 9, once again reveals the actor's willingness to experiment with genres. Last year, he tasted success with the horror film, Ezra. And now with 9, he is getting into the murky themes of supernatural thrillers. 9 also stars Prakash Raj, Mamta Mohandas and Godha fame Punjabi actress Wamiqa Gabbi. Lucifer Teaser: Mohanlal is The Devil's Incarnate in Prithviraj Sukumaran's Directorial Debut - Watch Video.

After some really good marketing drive, the makers have finally revealed the trailer of the film on a date that matches the title, January 9. Speaking more about the trailer, the promo of 9 (so named, for the nine days where the main events of the movie are set) manages to establish the spooky atmosphere without revealing too much about the plot. The gist is derived - it is a story of a father who tries to find out why his young son is behaving strangely all of a sudden. While the look of the film feels similar to that of Prithviraj's own Adam Joan, there are some striking visuals strewn throughout the trailer. The most intriguing scene happens before the trailer ends, when the child character faces a wall with a black spot growing on it and two red eyes staring through it. Kind of reminded me of Dario Argento's Suspiria. Kerala Floods: Prithviraj Sukumaran's Mom Mallika Sukumaran Rescued in a Vessel, Natural Calamity Hits Celebs And Commoners Alike.

My favourite shot is, of course, the final scene where Prithviraj is chased through a snowscape by a wolf in slow motion.

Watch the trailer of 9 here -

9 is directed by Jenuse Mohamed. It will be the first Malayalam movie to have its trailer being telecast in 15 Malayalam channels simultaneously at 9 pm today. 9 is also Sony Pictures India's first South production. The movie will release on February 9, 2019.

(The above story first appeared on LatestLY on Jan 09, 2019 01:20 PM IST. For more news and updates on politics, world, sports, entertainment and lifestyle, log on to our website latestly.com).