Acharya: After Prabhas, Chiranjeevi's Next May Get Delayed and Not Release on Sankranti 2020

After Prabhas' next with Pooja Hegde, we hear Chiranjeevi's Acharya may also skip its original release date and book a different slot in 2021. 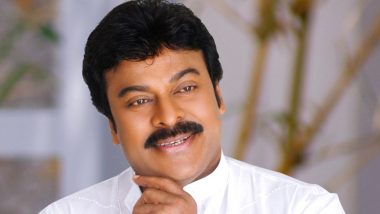 Chiranjeevi's next in the pipeline is Acharya. Directed by Koratala Siva, the movie was expected to hit the screens on Sankranti 2021 but owing to coronavirus lockdown, there are chances that its shooting may get delayed and the makers won't be able to complete the project by its original deadline. As a result, Acharya may not release in January next year and the studio could book a new release slot instead. Chiranjeevi fans are in for some big disappointment but let's keep hoping for the best. Acharya: Rana Daggubati to Play a Key Role in Megastar Chiranjeevi Starrer?

As per a report in Tollywood.net, the director has already wrapped 40 per cent shooting of this Chiranjeevi starrer and plans to complete the rest once lockdown is lifted. However, that's not his concern. He's instead worried for Ram Charan's dates. Since the actor is playing the lead in SS Rajamouli's RRR and the shooting schedule of which has gone for a toss like others, there are chances that he won't be able to sort out his dates. And once they wrap the shooting, they would need at least a month to work on its post-production formalities and hence sticking to its original release date could be impossible.

Speaking of Ram Charan, the director was always keen on having him in the movie with his father and superstar Chiranjeevi. While elaborating on the same, the Indra actor in one of his earlier interactions said, "Siva always wanted to cast Charan in the film. As he is busy with RRR, his dates are yet to be adjusted. It depends on the understanding between Siva and Rajamouli. In fact, it's not a cameo but reasonably a length one." Acharya: Kajal Aggarwal Has Not Walked Out Of Megastar Chiranjeevi Starrer, Confirms Actress’ Team.

Well, let's hope they complete the movie on time by sorting out Charan's schedule.

(The above story first appeared on LatestLY on May 24, 2020 04:38 PM IST. For more news and updates on politics, world, sports, entertainment and lifestyle, log on to our website latestly.com).