Bhajarangi 2: Shivarajkumar Is Excited About His Upcoming Movie Made on a Big Scale 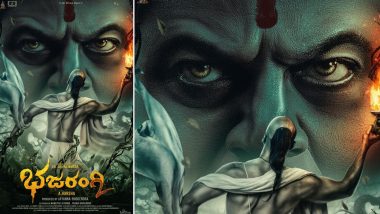 Kannada actor Shivarajkumar is excited about "Bhajarangi 2", and says the film has been made on a big scale. The teaser of the Kannada film "Bhajarangi 2" was released on Sunday on the birthday of Shivarajkumar. It is a sequel to the Kannada film "Bhajarangi" which was released in 2013. "As 'Bhajarangi' was a big success, We thought of making this film on a big scale and did our best, never did we think that it would go viral all over the country like this. Tughlaq Durbar: New Stills Of Makkal Selvan Vijay Sethupathi From The Upcoming Political Thriller Hit The Internet!

This is one of the best gifts I have gotten for my birthday. Getting an amazing response from many film industries. I thank everyone for the great response," Shivarajkumar said. The makers are pleasantly surprised and say that they will confirm about the pan India release after the theatres open up. Keerthy Suresh Starrer Penguin to Premiere on Amazon Prime on June 19! Here’s All You Need to Know About This Upcoming Film

They have also been getting many calls from other film industries and distributors to negotiate rights for the dubbed release. Directed by A. Harsha, the film also stars Bhavana, Shruti, Loki and Cheluvaraj.

(The above story first appeared on LatestLY on Jul 13, 2020 01:41 PM IST. For more news and updates on politics, world, sports, entertainment and lifestyle, log on to our website latestly.com).