S Thaman has shared a clip from the theatre, where he is seen dancing on the mass song from Bheemla Nayak, as drummer Sivamani accompanies the jamboree. 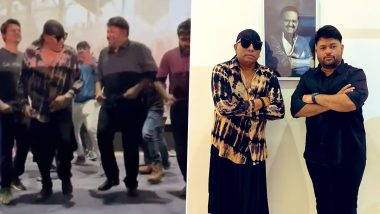 Hyderabad, February 27: Tollywood music director S Thaman has been on cloud 9 with back-to-back musical hits. The Ala Vaikuntapuramuloo musician has danced along with drummer Sivamani at the theatre screening Bheemla Nayak, leaving the fans to go gaga over his thumping music. Being lauded for his mind-blowing background music for Bheemla Nayak, the musician celebrates the huge success at the theatre. Bheemla Nayak Movie Review: Pawan Kalyan, Rana Daggubati’s Action Drama Opens To Positive Response From Critics.

Thaman has shared a clip from the theatre, where he is seen dancing on the mass song from the movie, as drummer Sivamani accompanies the jamboree. Sharing the same on his social media handles, Thaman wrote, "#GalagalagalagalaLAAAAAALAAAAA!! #BlockBusterBheemLaNayak THIS IS FOR MY DEAR LEADER #POWERSTAR SHRI @PawanKalyan GAARU AND MY GENIUS DIR SHRI #Trivikram GAARU. Hope U all like this."

Speaking at the success meet of Bheemla Nayak, Thaman stated that he was wanting to give his best for the Pawan-Rana -starrer ever since he got roped in to score the music. “It was not easy for Bheemla Nayak. From the start, there was some or the other issue, for this movie. Every day, we used to start working with much stubbornness.. Extremely happy for the movie's success”, Thaman said.

(The above story first appeared on LatestLY on Feb 27, 2022 09:13 AM IST. For more news and updates on politics, world, sports, entertainment and lifestyle, log on to our website latestly.com).