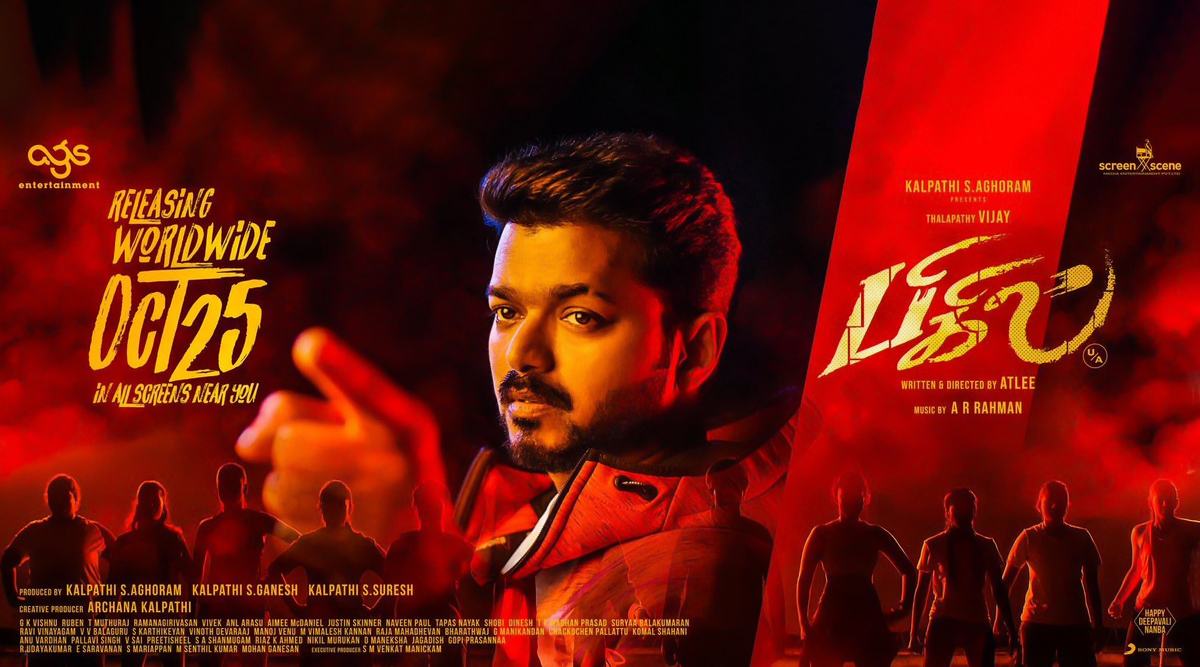 A court here has issued an interim injunction order barring the digital release of Tamil movie Bigil and its Telugu version Whistle. The civil court passed the order on a petition of Hyderabad-based filmmaker Nandi Chinni Kumar, who had sought orders to stop its theatrical, satellite and digital release. Vijay-starrer Bigil was scheduled to screened on Amazon Prime Video later this month. "The court had restrained Amazon Prime from uploading and streaming the film 'Bigil/Whistle' on YouTube or other modes of the broadcasting system until further orders," Kumar told IANS on Thursday. Viswasam, Bigil, NGK: Will a Tamil Movie Will Make It to the Year on Twitter List?

Claiming that he had acquired exclusive copyrights for making a film on the life of slum-footballer Akhilesh Paul, Kumar had given complaints of copyright infringement against makers of Bigil to the Telangana Cinema Writers Association, the South Indian Film Chamber of Commerce, the Tamil Film Producers Council, and the regional officer of the Central Board of Film Certification (CBFC), Chennai. Kumar filed a lawsuit against the film's director Atlee and actor Vijay, apart from the film's producers, stating they have violated a copyright agreement which he had signed with Akhilesh Paul. Vijay’s Bigil Is The Highest Grossing Tamil Movie Of 2019 In Seven Countries!

He claimed that there are striking similarities between the main character and plot events of Bigil and the exclusive life story copyright of Akhilesh Paul. Kumar had earlier served a legal notice to Akhilesh Paul, Hindi movie "Jhund" makers Nagraj Manjule, Bhushan Kumar (who is also CMD of T-Series), Savita Raj, and megastar Amitabh Bachchan. He alleged cheating, criminal intimidation, breach of contract and copyright infringement. Kumar, an independent filmmaker, sent also notice to Slum Soccer founder Vijay Barse, on whose life the film is said to be based on.

Alleging that he was cheated and criminally intimidated by makers of the film, Kumar plans to move the court to stop the screening of the movie in theatres, television and all digital platforms. The filmmaker claims that he bought exclusive rights in 2017 to make a movie on the life of Akhilesh Paul, a slum soccer player who was the Indian captain at the Homeless World Cup.

He claimed to have registered the story and script with Telangana Cinema Writers Association on June 11, 2018. "Though Nagaraj Manjule, director of Marathi blockbuster 'Sairat', bought rights to make a movie on the life of Vijay Barse, who is the coach of Akhilesh Paul, his film 'Jhund' also showcases Akhilesh's story in a major role, thus allegedly violating the copyright," he said.