Doctor To Release On March 26! Sivakarthikeyan’s Film To Clash With Mohanlal’s Marakkar Arabikadalinte Simham In Theatres

It was earlier in January that it was confirmed that Marakkar Arabikadalinte Simham will hit big screens on March 26. Now there is a Tamil film that is also set to be released on the same date and that Sivakarthikeyan starrer Doctor. 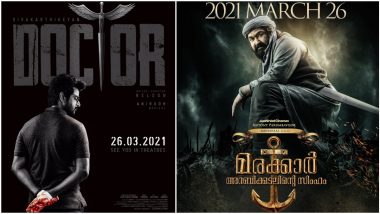 The theatres across the country have been permitted to operate with 100% occupancy from February 1 and since then movie buffs have been thrilled to watch their favourite films on the big screens. When lockdown was imposed due to the rising number of COVID-19 cases, many theatres in the country and in other regions of the world had to be shut down to curb the further spread of it. Then in India, from mid-October last year, theatres were permitted to be operated with 50% occupancy in select regions except for containment zones. From then some of the makers started to announce about the theatrical release of their films. Some of the films were even re-released in theatres. Mohanlal’s Marakkar Arabikadalinte Simham All Set To Be Released In Theatres On March 26, 2021!

There are many south films that are gearing up for theatrical release and one among them is Mohanlal’s Marakkar: Arabikadalinte Simham. It was earlier in January this year that it was confirmed that the Malayalam film will hit big screens on March 26. Now there is a Tamil film that is also set to be released on the same date and that Sivakarthikeyan starrer Doctor. Although both the films are of different genres and languages, both Mohanlal and Sivakarthikeyan have a huge fan base in the country and we are sure, nobody would want to miss the theatrical experience of Marakkar as well as Doctor. Doctor First Look: Sivakarthikeyan’s Bloodied Hands Will Make You Curious for This Film!

The makers of Doctor shared a poster in which lead actor is seen showing his back and his hands are all bloodied. He is seen dressed in a casual avatar, worn gloves and is seen holding a scalpel in his hands. This Nelson Dilipkumar film looks promising and we also cannot wait to watch Priyadarshan’s  Marakkar in theatres.

(The above story first appeared on LatestLY on Feb 03, 2021 01:14 PM IST. For more news and updates on politics, world, sports, entertainment and lifestyle, log on to our website latestly.com).