DSP is a masala entertainer written and directed by Ponram, and produced by Karthik Subbaraj. DSP stars Vijay Sethupathi, Anukreethy Vas, Prabhakar, Ilavarasu, Vimal among others. 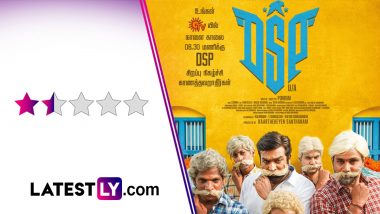 DSP Movie Review: Vijay Sethupathi really needs to take a chill pill and go on a vacation soon. Forget PM Modi, the busiest person in this country is none other than Makkal Selvan who seems to appear on our screens nearly every week in any format, from theatrical releases to OTT stuff, and in any language, from Tamil to Malayalam to Telugu and soon to arrive in Hindi as well. As I get into the theatre to watch his new venture DSP, I wonder whoever plans time-schedules for the National Award-winning actor would be having one of the most hectic jobs in the world. Kamal Haasan and Vijay Sethupathi to Reunite After Vikram for Thunivu Director H Vinoth's Next - Reports.

Let me clarify something, though. No matter how much he over-exposes himself as an actor these days, Vijay Sethupathi is always a delight to watch on screen. But when he appears in stuff that feels way below his calibre is when I get this feeling VJS needs to take a break and go slow in choosing his projects. Now having said that, let me share my thoughts on the actor's return to being the main lead in DSP, a big-screen masala entertainer after quite some time.

DSP is directed by Ponram, and it is a film that is supposed to cater to the frontbenchers. The movie begins with Vasco Da Gama (Sethupathi) travelling in a bus and telling his life story to a fellow passenger. The first half of the film feels like a light-hearted version of Mohanlal's Malayalam classic Kireedam, that itself got a Tamil remake in Ajith-starrer Kireedom. These portions set up Vasco's happy-go-lucky nature and his family life in Dindugal, where he roams around with his friends, tries to find a job and have occasional encounters with the feisty Annapoorani (Anukreethy Vas). Soon enough, he locks horns with the local goonda leader 'Mutta' Ravi (Prabhakar).

When Vasco realises that Ravi is protected from the law by police and the politicians, he decides to enter the police force and soon becomes the titular DSP. The second half gets into the typical cop entertainers that we have seen in the past, that evolves (or devolves, how you want to see it) into a revenge saga, albeit still continuing its light touches.

DSP continues Ponram's trademark style of treatment of using rustic plotlines that appeals to a larger audience base and give it plenty of comic touches. On paper, it is the kind of film an actor like Vijay Sethupathi could easily shine in. But those expecting DSP to be something on the lines of Sethupathi, the far smarter cop film of the actor, would be majorly disappointed. Actually, scratch that. If you like Sethupathi the actor in any capacity, then DSP comes across a major downer, that treads along the familiar tropes and be a bore at that, even though there are quite a few comic scenes. While some of the scenes raise occasional chuckles, most of DSP's humour pass muster, while the whole subplot involving actor Vimal in a cameo is grating. Michael Teaser: Sundeep Kishan, Vijay Sethupathi Starrer Promises to Be an Action-Packed Entertainer.

As for the serious scenes that pits Vasco against Ravi, they have nothing new to offer while the frustrating runtime of the film makes it seem that DSP has has no plans to reach any sort of conclusion.

Yes, Vijay Sethupathi still makes many of those scenes somewhat watchable with his natural screen presence and performance, but the actor himself has raised the bar of some his films so high that his involvement in DSP is nothing short of a travesty. Sethupathi deserves better, and as his admirers, even we deserve to see him in better stuff.

DSP tries to sail hard on Vijay Sethupathi's charisma but offers very little challenge to him as an actor. Even for its genre, the movie has nothing new to say, and feels merely like being poured old wine from a dusty old bottle.

(The above story first appeared on LatestLY on Dec 02, 2022 04:33 PM IST. For more news and updates on politics, world, sports, entertainment and lifestyle, log on to our website latestly.com).