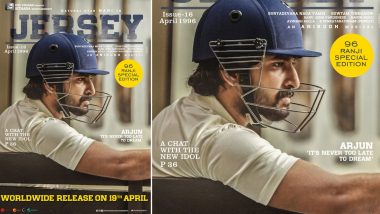 Telugu actor Nani's 2019 hit movie Jersey, starring himself, alongside names like Sathyaraj and Shraddha Srinath will be screened at the 2020 International Indian Toronto Film Festival. Jersey was a much loved and appreciated movie which had become a rage with the audience for its impeccable performances, screenplay and direction. The film's success has even prompted a Bollywood remake by the same name with Shahid Kapoor stepping into Nani's shoes and Jersey director Gowtam Tinnanuri being roped in, to helm the remake as well. Shahid Kapoor Says Nani Was Fantastic in Jersey, Reveals He Cried After Watching the Telugu Film.

As per reports in Times of India, the International Indian Toronto Film Festival, 2020, will kick off from August 9, 2020 and will end on August 15, 2020. The report also read, 'The (Jersey) team is excited about celebrating Independence Day in Canada with the screening.' Naga Chaitanya’s Majili, Nani’s Jersey: 7 South Movies on Cricket That Are Worth-Watching During This ICC World Cup 2019.

Check Out Jersey Poster Below:

Jersey traces the journey of an ex-cricketer Arjun, who for the sake of his son, picks up the bat once again at the age of 36. How Arjun goes on to make history with the help of his mentor. The Bollywood remake of Jersey, starring Shahid and Mrunal Thakur in the lead roles was announced in October 2019 and was scheduled to release in August 2020. However, the COVID-19 lockdown has thrown the whole schedule apart. Congratulations Team Jersey!

(The above story first appeared on LatestLY on Aug 01, 2020 08:48 AM IST. For more news and updates on politics, world, sports, entertainment and lifestyle, log on to our website latestly.com).