Jayasurya Birthday: From Classmates to Njan Marykutty, Here’s Looking At The Best Films Of This Malayalam Actor!

Jayasurya is one of the finest actors of Malayalam Cinema. He is not only a brilliant actor, but he is also a great playback singer and also a popular producer. 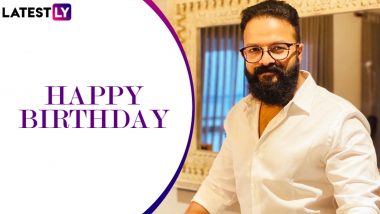 Jayasurya is one of the finest actors of Malayalam Cinema. He is not only a brilliant actor, but he is also a great playback singer and also a popular producer. Jayasurya, who celebrates his 42nd birthday today, has acted in more than 100 films. In fact, he has also won National Film Award – Special Mention for his performance in the films Su Su Sudhi Vathmeekam and Lukka Chuppi. Jayasurya has also won Kerala State Film Awards for Best Actor in Njan Marykutty and other movies as well. John Luther: Malayalam Actor Jayasurya to Play the Role of a Cop in This Thriller!

Jayasurya had made his acting debut in 1999 as a background actor with the film Pathram. He bagged his first lead role in 2002 with the movie Oomappenninu Uriyadappayyan in which he had played the role of a mute. Jayasurya has done varied roles in his acting career and today on the occasion of his birthday, let’s take a look at some of his best films!

This is a comedy drama featuring Jayaram, Jayasurya, Indrajith Sukumaran in the lead. Remake of the Tamil film Charlie Chaplin, Jayasurya plays the character John Mathai, who is a photographer in Mukundan’s publication.

Starring Prithviraj Sukumaran, Jayasurya and Indrajith Sukumaran in the lead, this Nadirshah directorial was a huge hit at the box office. Written by Bibin George and Vishnu Unnikrishnan, centers on three bachelor friends who live in the same colony Kochi, living a middle-class life. Jayasurya who plays the character Akbar is seen as a handicap person.

Jayasurya was seen in a totally different avatar in this film, written and directed by Ranjith Sankar. It is the story of Mathukutty who becomes Marykutty, the hardwork and hardships faced by her as a transgender to set a respectable identity in the society.

These are some of the best films of Malayalam actor Jayasurya. Here’s wishing this brilliant actor a very happy birthday and many more amazing projects in the future!

(The above story first appeared on LatestLY on Aug 31, 2020 02:09 PM IST. For more news and updates on politics, world, sports, entertainment and lifestyle, log on to our website latestly.com).