We watched the teaser and all we can say is hold your horses for KGF: Chapter 2 is going to be EPIC. 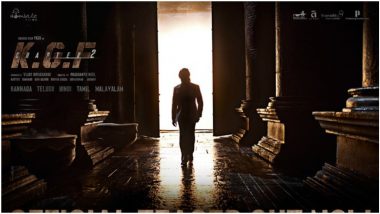 For those ardent Yash fans, here's the update that you all were waiting for. The makers of his next, KGF: Chapter 2 have finally decided to unveil the film's teaser, a day before his birthday. KGF: Chapter 1 was a huge hit at the box office and its success prompted the makers to plan chapter 2 on a grander scale. By roping Sanjay Dutt as the prime antagonist, they definitely intrigued the Hindi audience thereby broadening their overall fanbase. KGF Chapter 2: Sanjay Dutt Drops a Treat for His Fans on His Birthday, Shares His Deadly Look As Adheera in the Upcoming Action Drama (View Pic).

Going by its newly launched teaser, we can say that Chapter two will be worth all our long wait. The premise is more intense and the level of action has surpassed all our expectations. Yash's definitely going to own the big screens once again and his brawl with Sanjay Dutt would be worth watching. Yash looks dapper in all his scenes and his machoism and swag are hard to beat. For ones who couldn't stop rooting for the actor earlier, this one's going to be a bigger treat for your eyes. All we can say is hold your horses for KGF: Chapter 2 is going to be EPIC.  KGF Chapter 2: Yash’s Determined Look as Rocky in First Look Poster Is a True Treat For Fans, Teaser to be Revealed on This Date.

Check out the Teaser Here

Besides Sanjay Dutt, the film also stars Raveena Tandon and her addition has certainly amped up all our excitement. The film was originally scheduled to release in 2020 but got delayed amid the coronavirus pandemic. Post its delay, the makers are yet to decide on its new release date.

(The above story first appeared on LatestLY on Jan 07, 2021 09:46 PM IST. For more news and updates on politics, world, sports, entertainment and lifestyle, log on to our website latestly.com).