Telugu actor Adivi Sesh took to social media on Saturday to inform fans that the shoot of his upcoming bilingual film Major will resume in July. 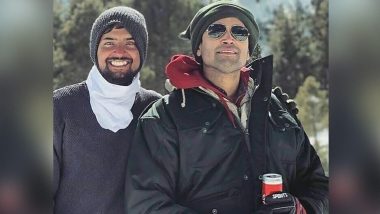 Telugu actor Adivi Sesh took to social media on Saturday to inform fans that the shoot of his upcoming bilingual film Major will resume in July. The film will release in Hindi and Telugu and be dubbed in Malayalam. It is a biographical drama starring Sesh as 26/11 martyr Sandeep Unnikrishnan. The film marks Telugu superstar Mahesh Babu's debut as a producer. Mahesh Babu, Adivi Sesh Share the Glimpse of Their Cute Pet Dogs to Fans.

Putting up a picture on Instagram with one of the producer of the film, Sharath Chandra, Sesh recalled shooting in Chitkul, Himachal Pradesh, along with the shoot update he shared. "When we began #MajorTheFilm last year #Chitkul was never colder. But brilliant visuals and amazing people led to great memories. Can't wait to start filming in July. An Epic Story inspired by the life of #MajorSandeepUnnikrishnan," he wrote. Major: Adivi Sesh-Starrer’s Release Gets Postponed Due to COVID-19; New Date Yet To Be Finalised.

"Major" was postponed due to lockdown, with portions of shooting still to be done. Earlier slated to release on July 2, a new date for the Shashi Kiran Tikka directorial is yet to be announced.

(The above story first appeared on LatestLY on Jun 19, 2021 06:09 PM IST. For more news and updates on politics, world, sports, entertainment and lifestyle, log on to our website latestly.com).