After FIR and Kaadan, Vishnu Vishal will be next seen in a psychological thriller, Mohan Das. 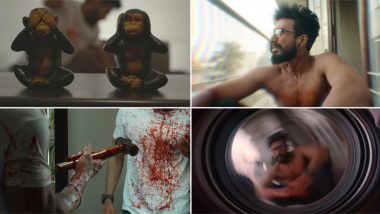 Vishnu Vishal is gearing up for his next release and the title of which was announced recently. The actor who is best known for his roles in Vennila Kabbadi Kuzhu and Ratsasan believes in doing cinemas that personally strike a chord with him. With multiple projects already in his hand, the announcement of his next, Mohan Das was a shocker but we mean it in a good way. Vishal had earlier hinted about making multiple announcements in the next few months and Mohan Das was one among the same. Vishnu Vishal and Amala Paul to Step into Nani and Shraddha Srinath's Shoes for Jersey's Tamil Remake.

Going by its title announcement video, Mohan Das comes across as a psychological thriller where the actor is either playing a brutal killer or a psychopath. Vishnu Vishal looks hysterical in this 1 minute 20 seconds long riveting video that's bound to engross you. Vishal's other release FIR had also aroused the same curiosity within his fans and admirers and going by his new announcements, we can say they are in for some big treats. Vishnu Vishal Opens Up About His Relationship with Jwala Gutta and Why There's No Space for Love in his Heart.

Check Out the Title Announcement of Mohan Das

How will you react if we say the actor had no plans of becoming an actor? However, a tragic leg accident in 2000 ended his cricketing career and he decided to pursue acting as an option. In his recent interaction with India Today, the actor revealed his next FIR to be an intriguing script. He'll also star in Kaadan and thinks people will relate to this film, as it's topical. "It talks about the effects of deforestation, wildlife and the ecological balance that they bring into the world. Prabhu Solomon sir taught me a lot about it during the shoot," he said.

(The above story first appeared on LatestLY on Apr 11, 2020 05:00 PM IST. For more news and updates on politics, world, sports, entertainment and lifestyle, log on to our website latestly.com).