Penguin Teaser: Keerthy Suresh’s OTT Debut Promises To Be a Spine-Tingling Watch Thanks to That Last Terrifying Frame (Watch Video)

The much-awaited teaser of Penguin, starring National Award-winning actress Keerthy Suresh, is finally out! The makers had released a brand new poster yesterday to announce about the release of the teaser, and here it is. 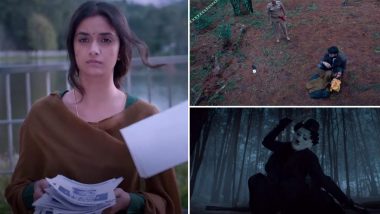 The much-awaited teaser of Penguin, starring National Award-winning actress Keerthy Suresh, who is making her OTT debut, is finally out! The makers had released a brand new poster yesterday to announce about the release of the teaser, and here it is. The first look poster of Penguin had shown Keerthy as a pregnant woman. It was a silhouette image with an intriguing caption that read, “She is aggressive, yet gentle.. She is majestic, yet modest.. She is #Penguin”. The teaser of Penguin has dropped a few hints of this upcoming flick, and we bet, it will send shivers down your spine. Penguin Title Poster: Keerthy Suresh’s Next to Be Produced by Petta Director Karthik Subbaraj.

The teaser of Penguin opens to a breathtaking view, in which you’ll get to see a glimpse of Keerthy Suresh and a child. Few seconds later, you’ll see the former calling out the name Ajay who has gone missing. The teaser shows how the heartbroken mother along with the help of a few others goes out into the wild to search for the child, puts up the leaflets of missing child, and much more. There are no dialogues but the visuals speaks volumes. In another sequence, Keerthy is seen holding the baby’s jacket that was found and it’s all bloodied. Towards the end of the teaser, a masked person is shown who is seen killing someone mercilessly. 5 South Movies Confirmed to Premiere on Amazon Prime Video.

Watch The Teaser Of Penguin Below:

The music of Penguin has been scored by Santhosh Narayanan and we must say, the background score for this mystery thriller has been composed perfectly. Penguin marks the debut of Eshavar Karthic as a director and with this impressive teaser, the expectations are sky-high. Penguin, produced by Karthik Subbraj under the banner of Stone Bench Films, is slated to release on June 19 on Amazon Prime Video. Penguin will be released in Telugu, Tamil and Malayalam languages.

(The above story first appeared on LatestLY on Jun 08, 2020 12:25 PM IST. For more news and updates on politics, world, sports, entertainment and lifestyle, log on to our website latestly.com).