The shooting of Master, directed by Lokesh Kanagaraj, was wrapped up on February 29. Produced by Xavier Britto’s XB Film Creators, Master is all set to be released on April 9. 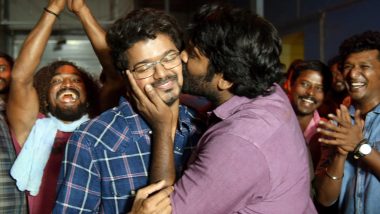 Thalapathy Vijay and Vijay Sethupathi on the sets of Master (Photo Credits: Twitter)

The picture that we’re talking about is the one in which Vijay Sethupathi is kissing Thalapathy Vijay on the sets of Master. They might be foes onscreen, but off screen they share a great rapport. Fans of these two actors are going bonkers ever since this picture has hit the internet. Both the actors are seen in a simple, casual avatars, and the people behind them seem to be cheering the duo as they wrap-up the shoot of Master on a sweet note. Thalapathy Vijay Wraps Up the Shoot of Master with Vijay Sethupathi.

Been an wonderful few months and it comes to a closure - Master shoot wrapped up !! Heart full of thanks to Thalapathy @actorvijay na, Makkal selvan @VijaySethuOffl brother and @Dir_Lokesh 😊 waiting for the #Master celebrations pic.twitter.com/SNNUUDcCW6

Isn’t that a million dollar picture? The shooting of Master was wrapped up on February 29. There are reports suggesting that the music launch of Master will take place on March 5, and we are sure, it would be a grand one. However, we’ll have to wait until the official announcement is made. The music of the film is composed by Anirudh Ravichander. Produced by Xavier Britto’s XB Film Creators, Master is all set to release on April 9.

(The above story first appeared on LatestLY on Mar 01, 2020 11:06 AM IST. For more news and updates on politics, world, sports, entertainment and lifestyle, log on to our website latestly.com).